Bank ‘not satisfied’ by profitability of its UK franchise, says Francesca McDonagh 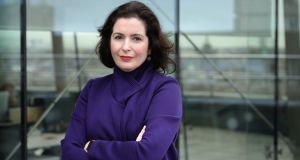 Bank of Ireland sees considerable opportunity in commercial lending as an investment gap emerges in spite of Brexit uncertainty, chief executive Francesca McDonagh told an audience in London on Wednesday.

Ms McDonagh said the bank sees “positive credit formation in the business sector, with growth in the stock of lending to businesses after ten years of deleveraging”.

She said that while nobody can provide assurances on the outcome of Brexit, a 30 per cent investment gap for Irish small and medium enterprises, when accompanied by plans from business to invest, presents significant opportunity.

Internally commissioned surveys show that the manufacturing sector expects to be hardest hit, she said.

“Undoubtedly, a number of borrowing and investment decisions are being deferred pending greater clarity on the final Brexit terms. In our most recent survey, half of the companies said they were adopting a ‘wait and see’ approach. You could sum this up as hoping for the best but preparing for the worst – which is prudent.”

At the Bank of America Merrill Lynch Financial CEO Conference, Ms McDonagh said the bank sees “material opportunities for retail and corporate banking” as significant investment is made in Ireland’s property market and infrastructure.

Ms McDonagh said the bank will unlock growth across the group by expanding its mortgage, SME and corporate lending in Ireland and by building out its wealth and insurance business.

While positive on the Republic, the chief executive of Ireland’s largest bank by assets said she was not “satisfied by the profitability of our UK franchise”.

Bank of Ireland is in the throes of a major information technology investment, a cultural “re-set”, and a plan to reduce its cost base to €1.7 billion.

Phase one of the bank’s €1.4 billion technology investment was completed in April and Ms McDonagh flagged that digital service “is best combined with a physical presence”, adding the bank has the largest physical network of any bank in Ireland.

Additionally, the chief executive updated the conference on the bank’s progress in the first six months of the year, noting it increased its net loan book by €500 million and increased lending by 16 per cent year-on-year.

1 ‘The only time apartments were viable was in . . . Ballsbridge, Killiney and Dalkey’
2 Corona beer firm reeling after 8% slide due to coronavirus
3 Suspicions rife as key Brexit trade talks begin in Brussels
4 Covid-19: Aer Lingus parent cuts capacity, unable to provide guidance
5 Life as a Facebook moderator: ‘People are awful. This is what my job has taught me’
6 Coronavirus: Wall Street joins global sell-off in worst week since 2008 crisis
7 London jury clears three former Barclays bankers of fraud charges
8 How well paid do you think you are? Here’s how to work it out
9 Has CRH done enough to silence pesky Swedish activists?
10 Why Irish banks are now looking beyond vulture funds on problem loans
Real news has value SUBSCRIBE