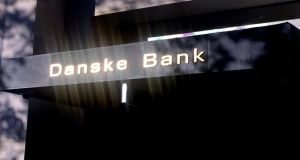 The head of Danske Bank’s wealth management unit, Jacob Aarup-Andersen, has been named by some as a likely new chief executive. Photograph: Jacob Gronholt-Pedersen/Reuters

Danske Bank on Monday appointed Jesper Nielsen, a member of its executive board and head of its Danish banking business, as interim chief executive after Thomas Borgen said he would quit amid a money laundering scandal. Borgen said he would resign after an internal inquiry found that €200 billion of payments, many of which Danske Bank said were suspicious, had been moved through its Estonian branch over a period of eight years.

Denmark’s largest bank said Borgen has been relieved of his duties, while Nielsen will continue to work as head of banking DK and is not a candidate for the permanent chief executive position.

“We are of the opinion that, with the situation the bank is in, it is best that the executive director is also part of the bank’s future,” chairman of the bank Ole Andersen said in a statement emailed to Reuters. He added that finding a new CEO was progressing as planned, but a spokesman for the bank declined to estimate when a new CEO could be announced, or whether the appointment of an interim CEO meant that the board has widened the search for a new chief executive.

The head of Danske’s wealth management unit, Jacob Aarup-Andersen, has been named by some analysts and media including Danish online media Finans as a likely new chief executive for the bank, although some say that at the age of 40 he is still too inexperienced for the top job.

Others who have been mentioned by analysts and media as possible candidates are the CEO of Danish mortgage lender Nykredit, Michael Rasmussen, the head of European fixed income and commodities at Morgan Stanley Jakob Horder, and Annika Falkengren, who is the former CEO of Swedish bank SEB and a partner in Swiss bank Lombard Odier. – Reuters