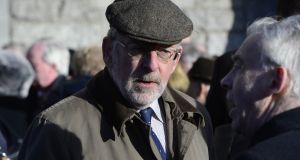 The Irish bank guarantee was flawed but not bailing out the banks would have been a case “of cutting off your nose to spite your face,” former Central Bank Governor Patrick Honohan has said.

On the 10th anniversary of the financial crash, Mr Honohan said that the austerity that followed was not just as a result of the bank guarantee.

“What the Government was doing as well, unrelated to the banks, they were using the property bubble generated revenue to spend on this, that and the other, and to lower tax rates, in a way that was unsustainable and it’s actually the pain of reversing those public spending and public taxation issues, that’s where the bulk of the austerity came from not from paying off the creditors of the banks,” he told RTÉ’s Today with Sean O’Rourke show.

He said that in the weeks prior to the bailout he had been concerned that the collapse in confidence in the “big banks” had gone beyond anything previously seen in history.

As a professor of finance in Trinity College at the time, he acknowledges that he was “observing from an ivory tower.”

“It was an extraordinary few weeks with the break down of a financial system that had been growing and deepening worldwide for the previous 50 years, particularly in the previous 10 years.

“In our case we had gone to extremes. In hindsight some kind of guarantee was inevitable and following the Irish guarantee many other countries provided one form or another of guarantee, Germany, Britain, USA, Denmark, Austria etc.

The Irish guarantee was the first one so it was uncomfortable for everybody else because it said ‘why aren’t you guaranteeing our banks too?’, but it was also technically flawed.

“There’s no point in saying ‘ah they got away’, some people did get away, but to not let them get away would have been to cause worse damage to the economy,” he added.

Prof Honohan said that the lack of consultation with other European countries had been a mistake. “The other countries were also floundering a bit, they didn’t know exactly what to do, a big initiative from a Triple A country like Ireland was a cat among the pigeons they would like to have had more time to make their own decisions.”

He said that the government did not have much choice as Jean-Claude Trichet of the European Central Bank had warned all countries not to let their banks fail.

With regard to the nationalisation of Anglo Irish Bank, Mr Honohan said “the issue there was whether their liabilities were paid or not, they were nationalised and the liabilities were paid, they’re still working out through the liquidation, the issue at that point was although it didn’t look bust they were under water, and leaving the owners in control of a bank that was under water is highly risky and its very bad practice to leave these insiders in control.

“It turned out that nothing too bad happened during those few months when they were in private control, but it could have been looted, so that was very unwise to leave Anglo Irish bank running when the external advisers.

Prof Honohan said he did no think the same thing could happen again, but he warned that there were other threats and risk such a cyber attack. “Are we fully safe against the type of corporate entitlement that has caused banks to charge whatever they like whenever they can get away with it? We saw the tracker mortgage [SCANDAL]and the way the Central Bank has clamped down on them and forced them to pay back.”

He pointed out that now there is a set of rules, laws in Europe “saying there will be a category of debt holders who will lose their money if the bank goes under, that set of rules didn’t exist before, will they be implemented? Well, they should be implemented, they were implemented to some extent in Spain last year.”

On the issue of the cap on bank salaries and the possibility of the Minister for Finance relaxing the cap on them, Prof Honohan asked why would Irish bankers come back to work in Ireland when they could earn more in London.

“Why take the risk? It’s a tough choice for the Minister to say allow higher salaries, yes they’re too high, but they’re only as high as London. They will introduce flexibility, but there are European rules on bank remuneration as well, there are complicated rules about bonuses.”