Britain shows the way to our Big Four

Top advisory firms struggling for a dose of reality 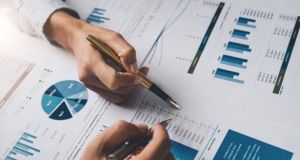 Poking fun at Britain has become something of a national sport in Ireland over the past couple of years – much of it justified as our near neighbour starts shooting at its foot over issues like Brexit and then expresses surprise that it has hurt itself rather than its intended target.

Their very tardy efforts to contain coronavirus and a somewhat arrogant view that they could ignore global advice and manage better themselves did little to burnish their reputation.

But there are times when our British friends can show the way.

Over the past two weeks, the leading names in UK financial services have shown the way, with partners at the Big Four accountants – KPMG, PwC, EY and Deloitte – announced dramatic cuts in pay of between 20 and 25 per cent to build up cash reserves as work dries up.

EY, for one, made a virtue of saying it hoped the measures would allow it to ensure lower-ranked staff get their jobs and pay. Other mid-tier players – Mazars, Grant Thornton and BDO – were upfront about the measures they are having to take.

Back home in Ireland? Apart from some refreshing transparency at Deloitte, there was little but some shuffling and mumbling about examining the impact on business. The UK may have been a slow starter but even it has figured out the likely impact on business by now – along with the likes of Central Bank, the ESRI, the IMF and the OECD.

Ironically, on the same day that the top tier here was being asked about their Covid-19 coping strategies, one of them, PwC, was publishing a survey of the views of corporate Ireland – specifically chief financial officers.

Mostly trained accountants, they were significantly more despondent even than their international counterparts, with 96 per cent reporting that the crisis was causing great concern. Over a quarter expected their companies to lay off staff in the next month, with 39 per cent expecting temporary furloughing of employees. Fairly stark and fairly frank.