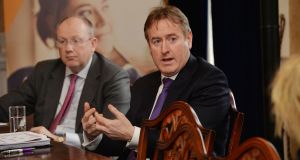 Permanent TSB’s (PTSB) board has selected internal candidate Eamonn Crowley to become its next chief executive, The Irish Times has established.

Mr Crowley (51) is already a top executive at PTSB and has already gone through a standard fitness and probity assessment with regulators. However, his appointment to the chief executive role requires a fresh assessment. It is understood this is taking longer than expected as supervisors and bank executives have been preoccupied with dealing with the fallout from Covid-19.

PTSB’s chief executive since 2012, Jeremy Masding, announced last October he was preparing to step down in 2020. It is not yet clear how the bank plans to backfill Mr Crowley’s current role.

The planned appointment of Mr Crowley comes at a time when banks are dealing with a surge in applications from households and businesses seeking loan payment breaks as much of the economy has been put into lockdown due to the coronavirus crisis.

While PTSB’s non-performing loans (NPLs) ratio had fallen to 6.4 per cent at the end of last year from a peak of 28 per cent in January 2018 – helped by the sale of €3.9 billion of problem loans – the industry faces the prospect of a fresh spike in distressed debt as borrowers are forced into default by the fallout from Covid-19.

The company said in February as it unveiled 2019 results that it was beginning to look into risks associated with its €2.5 billion portfolio of buy-to-let mortgages which were handed out before the 2008 property crash and are on interest-only terms until the loans mature. These loans account for 17 per cent of PTSB’s performing mortgage book.

Mr Masding also said in February that the bank faced “tough choices” to reduce costs as its underlying profit fell 21 per cent to €74 million last year amid a dip in net interest income.

The Irish Times reported last October that PTSB was working on a restructuring plan that was expected to involve the closure of about a fifth of the lender’s 77-strong branch network and the elimination of 10-15 per cent of its workforce. That equates to between 240 and 360 positions.

The Covid-19 crisis may impact the scale and pace of any restructuring. AIB chief executive Colin Hunt said in an interview last weekend that he had stalled voluntary redundancies at his bank as a result of the pandemic, with 350 positions he had planned to cull in the distressed-debt unit now likely to be retained as the sector eyes an increase in NPLs.

Mr Hunt said that he still plans to achieve his target of eliminating 1,500 jobs by the end of 2022.