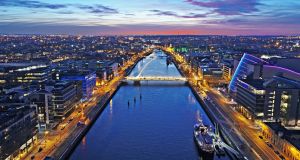 The EY report found the rate of relocation has fallen “significantly” in the past quarter.

Some 29 financial services (FS) companies have relocated staff or services from London to Dublin as a result of Brexit, according to a new report. This makes Dublin the most popular relocation site for the sector, with Luxembourg next on 25 and Frankfurt on 24.

Dublin has mainly attracted insurance, banking and asset management firms, along with a “significant proportion” of globally systemically important banks.

The EY report found the rate of relocation has fallen “significantly” in the past quarter.

“We’re now seeing those FS firms who have relocated, gained their licensing and are operationally ready, focus a lot more on ‘business as usual’. The challenge for them now is running their newly regulated entities across the European jurisdiction where market conditions are tough, regulators are demanding, and the need to deliver cost reduction and productivity increases are relentless,” said Cormac Kelly, financial services Brexit lead for EY Ireland.

“Furthermore, given the continued confusion around the UK political landscape and uncertainty on the timeline for a Brexit outcome, firms continue to spend time and effort planning for a no-deal, but most are seriously hoping for a clear resolution soon so that they can have confidence in a more certain 2020.”

Among the major investments announced for Dublin was Barclays, which has injected up to €2.6 billion of capital into Barclays Bank Ireland over the course of 2018 and the first few months of this year.

Bank of America has also invested millions of euro in Brexit preparations, adding 300 new jobs between Dublin and Paris, and JP Morgan has moved “several dozen” staff from London since June 2016, applying for new licences in Dublin and Luxembourg.

“Dublin’s retention of its place atop the relocation league table is particularly encouraging given the increasing focus within the sector on cost reduction,” said Neil Gibson, chief economist, EY Ireland. “The moderation of house price growth in the city and very benign inflation conditions have been extremely helpful and somewhat unexpected given the pace of Irish growth. In the event of a no-deal Brexit, the relocations will be very helpful in generating income that Government can invest to offset losses elsewhere in the economy.”

EY predicted the number of jobs relocated to EU locations from London would reach 7,000. Some 63 per cent of universal banks, investment banks and brokerages said they were considering or confirmed moving business and staff to remain within the EU.