PTSB to sell bonds where investors could suffer losses in crash 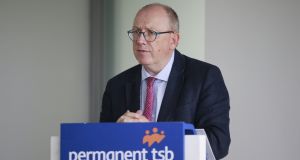 Permanent TSB is laying the groundwork for its first sale of bonds where investors could suffer losses if the bank runs into trouble in the future, even after Bank of Ireland surprised the market by pulling a debt sale last week as negative Brexit headlines rattled financial markets.

The bank, led by chief executive Jeremy Masding, has had a bond prospectus approved by the Central Bank, which would enable it to market bonds that can be bailed in, or converted into equity, to comply with new European rules designed to minimise taxpayer rescues in the repeat of the financial crisis more than a decade ago.

The contents of the prospectus, approved on Friday, according to the regulator’s website, have not yet been published.

PTSB is the last of the State’s three surviving rescued banks to start lining its balance sheet with bail-in-able bonds. AIB and Bank of Ireland have both been active in this area in the past two years.

Market sources have said PTSB may come to the market with a deal as soon as the second half of September. They said that the bank may start out with a sale of senior bonds, particularly after larger rival Bank of Ireland was forced to pull a sale of junior bail-in-able bonds last week, after being disappointed by demand for the process.

Junior, or subordinated bonds, stand to be first hit in the event of a company running into financial difficulty. Irish banks imposed €15 billion of losses on junior bondholders as taxpayers picked up a gross €64 billion rescue tab for the sector between 2009 and 2011.

However, senior bondholders were protected because of opposition at the time from the European Central Bank (ECB) and the fact that Ireland had no legal framework to “burn” them without also hitting depositors.

Depositors continue to enjoy greater protections under the new regime. That’s because most banks, including all three Irish lenders, have set up holding companies to issue bonds that can be bailed in. These lie above the operating companies, where deposits remain.

PTSB confirmed in July, as it reported a 50 per cent slump in first-half profits, that it would need to sell about €1 billion of bail-in-able senior and junior bonds by 2021 to comply with the new European rules. It signalled that it may initially tap the market either in September or October, with two follow-up transactions in 2020.

While a glut of companies across Europe have rushed to the bond market in the past week to take advantage of ultra-low market rates, Bank of Ireland pulled the sale of €300 million of junior bonds on Tuesday afternoon at the last minute.

The bank was concerned about low demand for the bonds, and how they would trade afterwards. The move to mothball the deal came as nervousness prevailed across financial markets as traders monitored dramatic developments in the UK parliament in relation to Brexit.

While government bonds are seen as a safe haven during times of market turmoil, junior bank bonds are at the other end of the risk spectrum and can trade more in line with equities.

Shares in AIB, Bank of Ireland and PTSB have each fallen by between 44 per cent and 48 per cent in the past 12 months, weighed down by Brexit concerns and a realisation that central bank rates globally are set to remain lower for longer and squeeze banks’ margins.

Bond investors are eyeing a key ECB governing council meeting on Thursday. While the market had been expecting as of the middle of last month that the ECB would unveil another massive stimulus plan to boost euro-zone inflation and the economy, a number council members have moved to rein in such speculation with more hawkish comments.