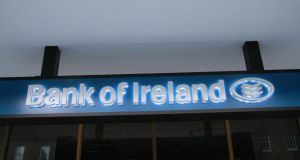 It appears that the Bank of Ireland link is tenuous as it relates to a nominee company associated to a subsidiary of the group that was sold eight years ago. Photograph: Nick Bradshaw

Bank of Ireland has had its name linked with a complex tax-evasion scandal that has rocked corporate Germany in recent years. The Irish lender is one of a number of banks and financial services company named by witnesses in the case.

However, it appears that the Bank of Ireland link is tenuous as it relates to a nominee company associated to a subsidiary of the group that was sold eight years ago.

Last week, a court in Bonn began hearing a trial where two UK investment bankers, identified only as Martin S and Nicholas D, have been charged with helping set up transactions between 2006 and 2011 that allegedly resulted in €400 million of losses to the German state.

The two men, who are co-operating with authorities in an effort to avoid jail time, have painted a picture of the how the wider financial industry was involved in so-called cum-ex deals, which allegedly took advantage of a German loophole – closed in 2012 – that allowed firms and individuals to trick tax authorities into refunding dividend tax that was never paid.

These trades exploited an interpretation of tax laws that seemed to enable multiple people to claim ownership of the same shares and the right to a refund of taxes withheld from dividends. Short selling of stock led to more than one investor claiming a refund while the tax was paid only once, according to the authorities. The current case is one of dozens in the works, amid estimates the German state lost out on €10 billion of tax.

In describing the role of various arms of the financial industry, Martin S told investigators that next to special vehicles set up for the purpose of buying stock, some German lenders also fulfilled that role, including MM Warburg and some regional banks, according to Bloomberg.

Short sellers were often investments banks, including Macquarie, Barclays and Banco Santander, among others, according to other witnesses, Bloomberg reported, citing court documents it had seen.

“Banks were allegedly also among the investors funds in funds that did cum-ex transactions, among them Credit Suisse Group AG and Bank of Ireland Group Plc,” Bloomberg reported, citing the documents.

When contacted by The Irish Times, a spokesman for Bank of Ireland said: “We understand that the company named in the case is Bank of Ireland Nominees Ltd, which is a company associated with Bank of Ireland Securities, a subsidiary which was sold in 2011.”

Nominee accounts usually hold investments on behalf of clients, rather than a firm itself.

“Bank of Ireland as a diversified financial services group adheres to the legislative and regulatory requirements in all countries in which it operates. We haven’t had any contact from authorities in relation to this investigation, but we will review any requests for information and respond appropriately,” the spokesman added.

1 Over 400 complaints from migrant workers at meat plants lodged with WRC
2 Coronavirus: We must save lives but we also need to live
3 Avoca warns of redundancies due to coronavirus
4 Virgin Media vows to withhold sports channels until Eir ‘pays its bill’
5 Companies without tax clearance shut out of Covid wage subsidy
6 Grounded Aer Lingus pilots develop fix for turnaround glitches
7 Anti-money laundering rules to be made law after State fined €2m for delays
8 John FitzGerald: Exchange rate control no panacea for economic crisis
9 Taxi app Free Now blames ‘technical issues’ for driver payment delays
10 Ufurnish: ‘It’s like Skyscanner, but for furniture’
Real news has value SUBSCRIBE