Bank of America confirms Dublin as location for EU hub 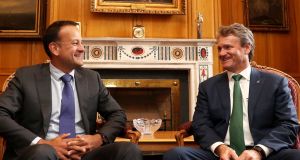 Wall Street giant Bank of America Merrill Lynch has picked Dublin as the preferred location of its EU hub, joining a growing number of international financial groups to outline initial plans for how they plan to deal with the fallout from Brexit.

Speaking to The Irish Times in Dublin on Friday, group chief executive Brian Moynihan said this will result in the bank’s existing Irish subsidiary merging with its current most important EU banking unit, based in London.

It will also involve the group setting up an EU trading operation, or broker-dealer, in the Republic, which will require separate Central Bank approval, he said.

The future Irish banking operation will be large enough for it come under the direct supervision of the European Central Bank’s banking supervision arm and it will also count as a “material entity” that must feature in the US group’s so-called “living will” with US regulators for how it can be restructured in the event of a future crisis, the chief executive confirmed.

Mr Moynihan declined to say the extent to which the Irish-based workforce will grow – it is currently in the process of growing from 600 to 700 under existing plans to expand its global technical and operations centre.

“That’s all part of the discussion. The question of what gets located everywhere is a long-term question based on a set of rules which no one has negotiated yet,” Mr Moynihan said.

The fourth-generation Irish American said, however, that the group will be forced to add to its existing office space Dublin, where it has accommodation in Leopardstown and Hatch Street, as its workforce expanse.

Alexander Wilmot-Sitwell, president of the group’s Europe, Middle East and Africa operations, said: “Until the final outcome of the political negotiations has been reached, none of us will know how we will operate in the future. We do know that we’re going to have to have entities in place within the single [European] market. But a hub starts attracting other things into it . . . creating a magnetic influence on the business.”

Investment banks including Barclays, Morgan Stanley and Citigroup have revealed in the past week that they plan to expand their Irish operations as they prepare for the UK to leave the European Union in March 2019.

Barclays is expected to add front-office trading jobs as it establishes its EU hub in Dublin, potentially doubling its existing 120-strong Irish workforce. Morgan Stanley aims to set up a fund management company in Ireland, which may employ between 20 and 50 people in addition to its existing 30 Dublin-based fund servicing and administration staff, while Citigroup said on Thursday it will also expand its footprint in the Republic, where it already employs about 2,500 people.

Still, both Citigroup and Morgan Stanley plan to establish their EU trading hubs in Frankfurt, Germany’s financial capital. Bank of America Merrill Lynch is the first US bank to pick Dublin for a broker-dealership.

Bank of America Merrill Lynch’s Irish subsidiary, Merrill Lynch International Bank (MLIB), had the largest balance sheet in Dublin in 2013, before its half-a-trillion-dollar financial derivatives portfolio was transferred to the UK. At its peak four years’ ago, MLIB’s assets stood at $595 billion, three times that of Bank of Ireland. It currently stands at $5 billion.

The decision to move the book of derivatives – which are essentially contracts between two parties linked to the future value or status or underlying asset, such as bonds or equities – was made at the time to simplify the group structure.

Mr Moynihan said that some of the derivatives portfolio, relating to the EU business, will have to return to Dublin, but he declined to give details.