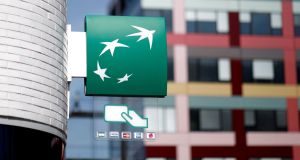 BNP Paribas and Société Générale missed out on the trading gains that boosted earnings at some of their US and European rivals in the first quarter, sending their shares tumbling.

Trading income at BNP Paribas, the largest French lender, fell 15 per cent as a drop in sales from fixed-income, currencies and commodities outweighed a gain in equities, the Paris-based bank said Friday. At Société Générale, stock and bond trading both dropped.

“It was a complicated quarter,” said Alex Koagne, an analyst at Natixis who has buy ratings on both stocks. “The dollar effect was negative, BNP and SocGen are strong in structured activities, which didn’t perform well.”

Shares of BNP Paribas fell as much as 3.5 per cent in Paris, while Société Genralé tumbled as much as 7.4 per cent, the most in almost two years.

BNP Paribas is pushing to become one of the top three European investment banks, partly by growing in Germany, the US and Asia as competitors retrench. It took a step backward in the first quarter. Debt trading fell by almost a third, even as a pickup in volatility drove demand for equity derivatives, lifting stock trading by 19 per cent.

At Société Générale, a global leader in derivatives on stocks, revenue from equities and prime services unexpectedly fell 11 per cent, while debt trading plunged by almost a third.

The banks’ trading performance lagged behind US peers. A 32 per cent jump in equities revenue propelled growth in the quarter at the top five Wall Street firms including JPMorgan Chase and Goldman Sachs , while fixed-income trading at the largest US banks was little changed.

SocGen is revamping top management after Mr Valet, an 18-year veteran at the French bank, stepped down in mid-March. The departure of the executive -- widely seen as a potential successor to Frederic Oudea as CEO – was part of an effort to settle a US Justice Department investigation into the bank’s alleged manipulation of interest-rate benchmarks, people with direct knowledge of the matter said at the time.

The French bank named Severin Cabannes to take over Mr Valet’s duties. He was appointed alongside three new deputy chief executive officers in a shake-up late on Thursday as Oudea seeks to revive growth and put an end to the bank’s lingering legal issues.