Bank of England sees up to 75,000 finance job losses after Brexit 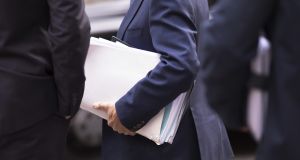 The Bank of England expects Britain to lose up to 75,000 financial services jobs after the country leaves the European Union in 2019, the BBC reported on Tuesday. Photograph: Jason Alden/Bloomberg

The Bank of England expects Britain to lose up to 75,000 financial services jobs after the country leaves the European Union in 2019, the BBC reported on Tuesday.

“I understand that senior figures at the Bank are using the number as a ‘reasonable scenario’, particularly if there is no specific UK-EU financial services deal,” the BBC’s economics editor Kamal Ahmed wrote, without providing a more specific source. He added the BoE thought the figure could vary depending on the terms on which Britain left the EU, and that 75,000 was at the upper end of projections provided by other groups. The BoE did not have an immediate comment.

Two BoE deputy governors whose roles cover financial services, Jon Cunliffe and Sam Woods, are due to speak to a parliament committee about Brexit on Wednesday. The BoE is currently assessing British-based financial services firms’ contingency plans to minimise disruption after Brexit.