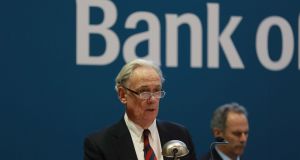 Bank of Ireland chairman Archie Kane is to step down from this position later this year. Mr Kane has been in the role since mid-2012 and is stepping down as “originally planned”, according to the bank.

The date of his departure will be announced in “due course”.

Mr Kane’s decision to step aside comes less than five months after Richie Boucher stood down as group chief executive to be replaced by Francesca McDonagh.

Bank of Ireland is due to publish its annual results on February 26th, when it is expected to announce it first dividend to shareholders since the crash in late 2008.

The company will hold its agm on April 20th and an investor day on June 13th.

Bank of Ireland’s annual report for 2016 shows that he received an annual non-pensionable salary of €394,000 for his role as chairman and governor. In addition, he had a consultancy arrangement with the bank’s UK subsidiary, for which he received a fee of €59,000.

He also received an accommodation, utilities and car allowance of €37,000, to bring his total remuneration to €490,000.