Q&A: Why PTSB is proposing to sell on its mortgage loans 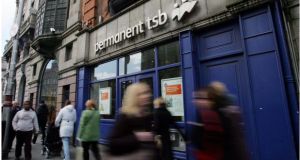 Permanent TSB had the highest level of non-performing loans in the Republic last June, at 28 per cent. Photograph: Bryan O’Brien

Why is Permanent TSB proposing to sell on mortgage loans?

Ten years after the crisis, all the banks are under pressure to deal with the non-performing loans on their books. This pressure is coming mainly from the European regulator – the Single Supervisory Mechanism (SSM), which is the arm of the European Central Bank that oversees the big banks.

The regulator is pressing banks to reduce their non-preforming loans, because it says they create a risk for the future and also hamper the banks from operating and lending normally. Permanent TSB (PTSB) has 28 per cent of its loans classified as non-performing, so it is likely to be under particular pressure to act. It has signalled that it will sell on some €4 billion of its non-performing loans, involving a mixture of residential and buy-to-let mortgages. The likely buyers are international vulture funds. Other Irish banks are likely to consider similar sales.

What are vulture funds?

It is the name given to investment funds who seek to buy troubled assets at a low prices and sell it on for a higher one. Some of these funds made a killing on Irish commercial property after the crash, buying portfolios of loans at the bottom of the market and selling them on. They have also bought some residential mortgage loans from international banks who have pulled out of the Irish market and also loans from buy-to-let borrowers. These funds would be the most likely buyer of the PTSB portfolio.

What does it mean for borrowers?

It means, firstly, that they owe the money to someone else and not the original lender, though the original terms of their contract continues to apply, of course. Consumer protection legislation was changed in 2015 so that now the companies that manage loans in Ireland on behalf of the vulture funds are subject to the same rules as the Irish banks in dealing with residential mortgage customers. This means that the same processes apply for people who are in arrears and the same obligations exist to offer solutions via a managed process as do for domestic banks.

So why the fuss?

Some see a risk of a gap in the legislation protecting consumers, because the Central Bank here regulates the intermediary which manages the loan for the vulture fund in Ireland, and not the fund itself. Fianna Fáil is arguing that this needs to change before the PTSB sale goes ahead in order to increase the level of consumer protection. In 2015, the Central Bank did argue that it should be allowed to regulate the funds directly. While the Code of Conduct on Mortgage Arrears – the rules which govern how people are dealt with – will still apply, the Central Bank felt it would have greater control if it directly regulated the owner of the loan. This could become an issue if, for example, the fund decided to try to increase the interest rate that applied. The fund owners would also be the people to make a call on strategy on repossessions and legal action against borrowers in arrears.

Is this all negative for borrowers?

Some borrowers will fear the the vulture funds will move more quickly against them, as they will not fear any negative PR in the same way as a domestic bank. This is hard to call in advance, though often such funds will seek a return over a few years.

It may not all be negative. Whoever buys the PTSB loans will do so at a discount and may be more prepared to do deals with borrowers, which may suit some. And a range of options do exist now for borrowers in distress, ranging from mortgage to rent schemes to the new insolvency legislation.

The main fears of borrowers will be that a fund would act more aggressively than an Irish bank. In some cases, where the borrower hasn’t engaged with the bank, there may be little public sympathy. However, there will certainly be many cases where borrowers are in difficulty due losing a job or other difficult circumstances and so this could become a politically significant issue. In other cases, borrowers will have come to some restructuring deal, but be unable to afford this over time.

How come the Irish banks still have so many bad loans, so long after the crisis?

The clean up of bank loan books after the crisis has taken much longer than it should have. Banks were slow to act, reluctant to deal realistically with many borrowers as this would involve accepting losses up front. New mechanisms – such as mortgage to rent and the new insolvency laws – were slow to be introduced. And banks have tended to be slow to act, particularly in the harder cases where there was no obvious solution, bar legal action to repossess.