AIB has written off €1.3bn in mortgage debt to ‘right-size’ loans for customers 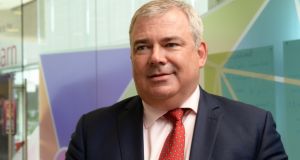 Bernard Byrne: reminded the committee that AIB had repaid €6.5 billion since the crash. Photograph: Cyril Byrne

AIB has written off €1.3 billion in mortgage debt since the crash to help “right-size” the position of arrears customers who have engaged with the bank about their loan issues, the bank’s chief executive Bernard Byrne has revealed.

Appearing at the Oireachtas finance committee, Mr Byrne said that in cases where arrears customers engage with the bank about their debt problems, “we will right-size the debt”. AIB has offered about 37,000 solutions to mortgage arrears customers with more than 13,000 currently 90 days or more behind with their payments.

The bank told the committee that the repossession rate was about 1 per cent of its arrears cases. Mr Byrne said AIB would have written off similar amounts for SMEs and other portfolios of customers.

Mr Byrne also told the committee that some 14 AIB mortgage account holders could have lost their homes by not having the correct tracker rate applied to their loans.

These were all owner-occupied properties and Mr Byrne said this was the bank’s best “assessment” of the number at this point in time.

He said AIB had written to 2,600 mortgage customers to inform them that they were overcharged by being denied a tracker rate in the past.

This move by the bank follows a look at its entire mortgage book as part of an industry-wide review ordered by the Central Bank of Ireland.

The regulator’s move was designed to unearth cases where borrowers might have been denied a lower tracker interest rate after the crash in 2008.

Mr Byrne said the customers affected would have their rates changed and balances amended, and would receive financial compensation. He said this work would continue into early 2017.

Mr Byrne told the committee that his annual remuneration as chief executive was €600,000. This comprised a salary of €500,000 and a 20 per cent pension contribution. In AIB’s 2015 annual report, Mr Byrne’s remuneration was listed as €587,000 but this lower amount reflected the fact that he was chief executive for only part of the year.

Sinn Féin’s finance spokesman Pearse Doherty had earlier challenged Mr Byrne about AIB’s responses to a series of questions posed by the committee in advance of his appearance. One of the questions asked the bank how many employees were earning more than €500,000 a year in total remuneration. AIB answered none, when in fact Mr Byrne and the bank’s finance chief Mark Bourke are listed in the annual report as earning more than this figure, when pension payments are included.

Mr Doherty wondered if AIB set out to mislead the committee but Mr Byrne said the bank’s reply showed the cash payments made to employees.

Mr Byrne said AIB, which is 99.9 per cent State-owned having received a €20.8 billion taxpayer bailout, was now well capitalised and its objective was to “facilitate the repayment” of its taxpayer bailout in full over time. He said this could be through share sales or via regular dividend payments, but he declined to say when a dividend might be paid to the State.

“From my perspective, the aspect within my control is the management and performance of the bank and ensuring that international investors have a clear understanding of our strategy, progress and future trajectory.”

He noted that the Department of Finance last week appointed capital markets advisers to look at the potential for a stock market flotation of AIB’s shares. Mr Byrne reminded the committee that AIB had repaid some €3.5 billion of capital to the State in the past 12 months, bringing total payments to €6.5 billion since the crash, including fees, coupons, and levies.