Full €20.8bn can be repaid, says CEO Bernard Byrne ahead of committee appearance 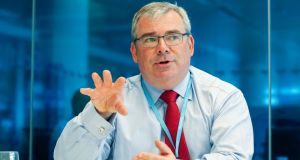 AIB has paid €6.5 billion to the State since being bailed out and expects to pay back the whole amount in full over time, its chief executive Bernard Byrne will tell the Oireachtas finance committee today.

“The bank intends to put the shareholder in a position whereby the full €20.8 billion invested in the bank by the State can be recovered and is confident of doing so over time,” the bank said in response to question from the committee in advance of the meeting. “The ultimate timing of this is dependent on when the government decides to return the bank or part thereof to private ownership.”

AIB’s 17 pages of responses note that six employees are currently each earning more than €400,000 a year.

This is below the €500,000 a year salary cap imposed by the Government but the names of only two of the executives on such sums are listed in its annual report – Mr Byrne (who earned a salary of €479,000 last year, and chief financial officer Mark Bourke, who received €450,000).

In July 2014, AIB launched a product to allow such customers to retain their original tracker rate plus an additional margin of 1 per cent for the balance of their mortgage. The bank said its tracker retention product accounted for 4 per cent of new business in the first half of 2016.

The bank, which is 99.9 per cent State owned, said its highest mortgage interest rate was 3.8 per cent for a five-year fixed product. Some 6 per cent of customers pay this rate.

AIB said it had 569 owner-occupied homes in its possession at the end of June. It also has 767 orders for repossession granted and another 2,879 court hearings in progress.

In addition, AIB revealed that its mortgage market share in Northern Ireland is just 1 per cent.