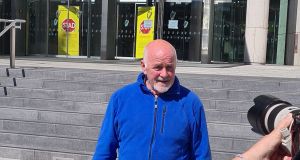 The former chief executive of Custom House Capital and four former executives of the broker that collapsed with multimillion euro losses have been sent forward for trial.

Mr Cassidy, with an address at The Hill, Clon Brugh, Stepaside, Dublin 18, was charged with misleading customers and clients as to the where and how assets were placed in Custom House Capital, contrary to common law.

The offences are alleged to have happened from October 2008 until July 2011.

He appeared at Dublin District Court on Friday with four co-defendants who had been charged earlier with the same offence.

The Director of Public Prosecutions directed trial on the indictment.

The businessman, who has not yet indicated how he will plead, had to surrender his passport and must not to apply for any new travel documentation.

He was granted legal aid.

They are also accused of misleading investors as to the where and how assets were placed in the investment firm from October 2008 until July 2011.

Judge John Brennan told the five they were being returned for trial at the next term of the Dublin Circuit Criminal Court. They will face their next hearing on December 4th.

The court was told Ms Kelleher’s reply to the charge was “I am innocent”; the co-defendants made no reply when they were charged.

The co-defendants had to surrender passports and cannot apply for new travel documentation. The court has ordered them to “have no contact directly or indirectly with co-accused or any witnesses in the case”. They also had to provide gardaí with their mobile phone numbers and must sign on once a week at local Garda stations.

The five remained silent during the hearing.

The judge warned them they must notify the prosecution within 14 days if they intend to use alibi evidence during their trial. He also directed copies of video evidence to be furnished to their lawyers.