Income and pretax profits up sharply at Greencoat Renewables 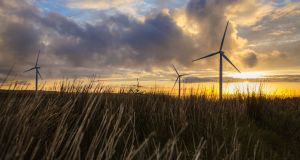 The Sustainable Energy Authority of Ireland says in spite of progress made, Ireland will not meet 2020 renewable energy targets

Greencoat Renewables, an Irish energy company, has reported a sharp rise in both income and profits in its first set of results for a full year as a listed company.

The company, which is initially focused on investing solely in operating Irish wind assets and listed on the Irish stock market in July 2017, said that total income rose to €58.4 million in the 12 months to December 31st, 2018, up from €13.2 million in the prior year.

Greencoat said it would pay a dividend of 6 cent a share, but had increased its target to 6.03 cent for 2019, “consistent with our commitment to a progressive dividend policy”, said Ronan Murphy, non-executive chairman of Greencoat Renewables.

Its share price closed down almost 1 per cent in Dublin following the publication of the results.

The company generated net cash of €23.1 million, and Mr Murphy said that the past 12 months have been “transformational for the company, delivering on all of our strategic goals and diversifying the portfolio, whilst continuing to achieve operational excellence”.

“We continue to see a significant aggregation opportunity for the business,” Mr Murphy said.

Looking ahead, Greencoat said that the “Irish wind market remains very attractive, with a stable and supportive regulatory regime”.

Greencoat also said on Monday that it is to issue further new ordinary shares as part of the share-issuance programme announced in July 2018.

Separately, more than 10 per cent of Ireland’s total energy came from renewable sources in 2017, according to a report by the Sustainable Energy Authority of Ireland.

However, it said in spite of progress made in this area, Ireland would not meet 2020 renewable energy targets.

“We need to accelerate the pace of change. Collectively and individually, we need to take greater advantage of the renewable resources available to us here in Ireland,” said SEAI chief executive Jim Gannon.

The report provides a detailed analysis of Ireland’s progress towards the 2020 renewable energy targets.

Ireland has committed to a target of 16 per cent of total energy from renewable sources by 2020. The report shows that 10.6 per cent of energy consumed in Ireland in 2017 came from renewables, with the remainder coming from carbon-intensive fossil fuels.