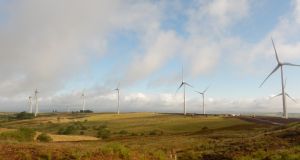 The Slieve Divena II wind farm near Ballygawley in Co Tyrone is capable of generating enough energy to power 16,300 homes.

A sister company of Dublin-listed Greencoat Renewables has acquired a wind farm in Co Tyrone for £51 million (€61 million) from UK energy giant SSE.

Greencoat UK Wind, a fund which has a common investment manager with Greencoat Renewables – Greencoat Capital – has bought the Slieve Divena II wind farm near Ballygawley.

The farm, developed by SSE Renewables, generates 18.8 mega watts (MW) of power and sits adjacent to the 30 MW Slieve Divena wind farm which Greencoat acquired in 2017. It is capable of generating enough energy to power 16,300 homes.

SSE Renewables is a subsidiary of FTSE-listed SSE plc and has a portfolio of about 4 giga watts (GW) of onshore and offshore wind as well as hydro electric power.

Under the deal, SSE will enter into an asset management agreement to manage the wind farm following the sale while its retail arm, SSE Airtricity, will continue to sell the energy generated at the site.

The acquisition comes amid a flurry of activity in the renewables sector. Just this month, Greencoat Renewables bought a Co Clare wind farm for an initial consideration of €35.4 million while French electricity giant Électricité de France (EDF) acquired a 50 per cent interest in a wind farm off the coast of Co Wicklow from a company linked to property developer Johnny Ronan.

“We are delighted to acquire our eighth wind farm from SSE Renewables, which is testament to the long-standing relationship we have developed,” Tim Ingram, chairman of Greencoat UK Wind, said.

The proceeds of the transaction, expected to complete by the end of March 2020, will be used by SSE to reduce its net debt, the company said.

“Strategic asset disposals are in line with our long-standing approach to create value from the development and operation, as well as ownership, of renewable energy assets, and supports our ongoing future investment strategy to develop and build more onshore and offshore wind farms in our core markets of the UK and Ireland, ” said Jim Smith, managing director of SSE Renewables.

Following the transaction, SSE Renewables will control 689 MW of onshore wind farms on the island of Ireland. In total, it owns nearly 2 GW of onshore wind capacity with an additional 1 GW under development.