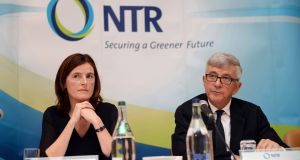 NTR owner Woodford Capital boosted the value of the energy company by €3.5 million in its last financial year, leaving the parent with a profit for the period.

Accounts for the Roche-family-owned Woodford Capital, which holds almost 94 per cent of the toll-road-turned-renewable energy business, show a profit of €3.54 million for the 12 months to March 31st, 2019.

The profit stems from Woodford revaluing its assets, namely its holding in NTR, which buys and finances wind and solar power projects in Ireland, Europe and the US.

The company’s balance sheet shows that Woodford’s net assets increased to €33.54 million on March 31st last year from €30 million 12 months earlier. A spokesman did not comment on the figures.

The company did not say how much it paid for the electricity plant, but the project would have cost about €40 million to build.

Ballycumber is one of the last wind farms whose revenues are guaranteed by a State-backed scheme funded by all electricity customers.

More recently, one of three wind farms backed by NTR in Sweden signed a deal guaranteeing that a local utility would purchase the electricity it generated.

NTR’s two separate funds have backed energy projects in Ireland and Europe that attracted a total of €2.1 billion in investment in both equity and debt.

Its first fund invested €200 million in wind farms in Ireland and Britain, which borrowed a further €400 million. The second fund spent €500 million funding wind and solar energy projects in Europe and the US.

Businessman Tom Roche founded NTR – formerly National Toll Roads – in the late 1980s. Its first project was the Westlink toll bridge in Dublin, which it sold back to the State for €600 million in 2007.

Woodford also owns 38 per cent of Atlas Investments, which is selling off some assets that formerly belonged to the toll road company before ultimately being wound up.