Motorists swerve electric cars because of lack of charging points 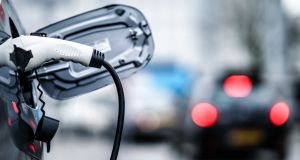 Official targets foresee getting a million electric vehicles on the Republic’s roads by 2030. Photograph: iStock

Motorists are steering clear of electric cars because the Republic does not have enough charging points, according to a leading auto industry figure. James McCarthy, chief executive of Nissan Ireland, told the Association of Chartered Accountants’ (ACCA) business leaders’ forum that the problem could prevent the State from hitting its target of getting a million electric vehicles on the road by 2030.

“The pace of development in the public charging network is out of kilter with Government targets and is deterring many motorists from swapping out their fossil fuel car and is slowing the uptake of electromobility,” he said.

“The new government needs to make investing in the public charging infrastructure an urgent priority.”

Caitríona Allis, head of ACCA Ireland, pointed out that while motorists got tax breaks for owning electric vehicles, the lack of charging points was hindering their expansion.

“We recognise that it will take a significant amount to meet 2030 targets; however, it is a commitment that is needed to make Ireland sustainable,” she said.

1 Passengers face queuing in car parks at Dublin Airport
2 Major credit union plans to limit savings accounts to €40,000
3 Woodchester founder Craig McKinney dies
4 Ikea among major retailers to reopen next week
5 Angela Merkel sweeps in to save the euro zone
6 Revenue tells court it was entitled to raise €1.64bn tax assessment against Perrigo
7 Penneys will not reopen on Monday despite expected changes to lockdown rules
8 Credit union limit, Penneys stays shut, more stimulus and shopping for Ireland
9 Student accommodation sector set for harsh Covid-19 lesson
10 Brother is dragging his heels as executor of uncle’s will - is there anything I can do?
Real news has value SUBSCRIBE