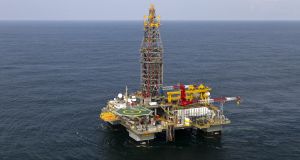 A Tullow Oil offshore platform near the coast of French Guyana. Oil in the region was found to be too costly, and possibly commercially unviable, for Tullow to extract. Photograph: Jody Amiet/AFP via Getty

Dorothy Thompson, the energy sector veteran who took over as chair of Tullow Oil in the middle of last year, presided over a “kitchen sink” approach on Monday as the group shocked the markets by lowering oil output guidance, suspending its dividend and announcing the immediate departure of its chief executive and exploration director.

She had little choice, after a drip-drip of bad news from the oil company over the course of 2019. This included three downgrades to full-year production – the last of which was delivered only four weeks’ ago.

In addition, we learned last month that oil recently discovered off the coast of Guyana was found to be heavy and high in sulphur, making it costly, and possibly commercially unviable, to extract.

Thompson pledged on a call with analysts after the latest announcement – which prompted Tullow shares to slump by almost 75 per cent to hit a two-decade low – to carry out a “thorough review” of Tullow’s operations.

Christmas has effectively been cancelled, as top executives face a tight turnaround to complete the review in January.

An equally important piece of work will be to find out what’s behind the slow flow of negative news from the company, and a claim by one analyst on the call that there appears to be a “culture of fear” in Tullow Oil – where bad news either doesn’t make it to the top or is ignored.

“I wouldn’t say that I or anyone on the board has done a forensic investigation on why these messages didn’t flow through. What I would say is that I am confident that we have that skilled, technical capability to have understood them at the rock-face,” she said. “A transparent and open culture is absolutely critical for our success and we’ll do everything we can to ensure that’s the case.”

Executives on the call insisted they were happy with the headroom they have on their lending covenants and downplayed speculation that the company, which raised £600 million (€713 million) in early 2017, may have to go cap in hand to shareholders again.

Investor confidence has been shot, putting the company and some of its assets – it is trying to sell down stakes in assets in Kenya and Uganda – on the radar of bargain-seeking rivals.