Cantillon: Auto industry looks to take vehicles to next level with tough-driving trials 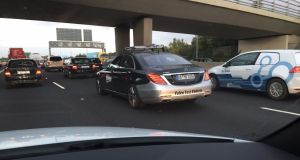 A Valeo test vehicle on Dublin’s M50: Self-driving vehicles use video and radar to feed data to the self-driving programmes.

The Government is to amend road traffic legislation to allow for the testing of self-driving vehicles on Irish roads. So what has the State got to give the autonomous driving world? Rain and poor road-markings. It seems that Irish motorists’ pain is the automotive industry’s potential gain.

Self-driving vehicles use a combination of video and radar to feed data to the self-driving programmes. Both the cameras and the radars have shown to work reasonably well on the dry and well-marked highways of certain US states such as California. But the big test will be how they might cope in the midst of a downpour on a twisting Connemara road where the road signs are missing, there’s a line of grass in the middle of the road and there’s a chance the in-car computer may confuse the enormous pothole for the impact site of a meteor strike.

At present the law requires that the motorist be in charge of – and be responsible for – the vehicle. The latest systems on sale with new cars allow for braking and some steering functions to be operated by the vehicle’s software, through features such as adaptive cruise control or lane-keeping assist. The next level of autonomous driving – so-called Level 3 autonomy– means that at certain times the vehicle will be fully in control. That’s where the changes in legislation are required.

So far, any testing of the cutting-edge, self-driving technology in Ireland has been done on private land or via simulators. But there is a significant hub of research in the west of Ireland ready to take advantage of any changes. For example, Jaguar Land Rover recently opened a major research facility in Shannon. Lero, the Science Foundation Ireland funded software research group, last year announced a collaboration with Valeo, the French car components and technology giant, to develop new sensor technology for autonomous cars. Valeo has an 1,100-strong research and development group, based in Tuam, and has been collaborating with NUI Galway for almost two decades now. When it comes to autonomous driving, the west’s awake.

There are risks, of course. There already have been fatal crashes in the US involving autonomous vehicles. However, properly monitored and managed, Ireland has a big opportunity to be at the cutting edge of the biggest revolution in transport in a century.