Infrastructure struggling to cope with rising level of renewable energy, according to report 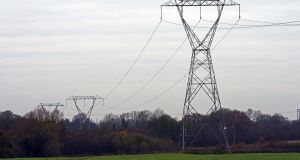 The Republic’s transmission system ‘is now struggling to cope with rising levels of renewable energy, a challenge which will only grow as new wind and solar farms are built’. File photograph: The Irish Times

Strengthening the power grid on the island of Ireland is urgently needed to facilitate scale-up of renewables and end increasing wastage, according to a report to be published by Energy Storage Ireland (ESI) and the Irish Wind Energy Association (IWEA).

Though Ireland is a world leader in integration of renewable electricity, its transmission system “is now struggling to cope with rising levels of renewable energy, a challenge which will only grow as new wind and solar farms are built”, the report concludes.

The case for strengthening the system is underlined by the latest EirGrid figures, indicating enough renewable electricity was lost in the Republic during the first six months of 2020 to power Galway for a year; the equivalent of powering 150,000 homes, it notes.

Renewable electricity is lost when wind farms are instructed to reduce the power they generate, because the transmission system is unable to cope with the large volumes of clean power available. This is known as “dispatch down” and for the first half of 2020 almost an eighth of available wind energy was lost.

This increased fossil fuel dependency, generating an additional 47,000 tonnes of CO2 every month.

The Saving Power report commissioned by the energy storage industry and wind energy developers outlines how a stronger grid is essential to achieving the Government’s 70 per cent renewable electricity target by 2030.

IWEA chief executive David Connolly said: “We cannot achieve our 2030 targets with today’s electricity system. There are already wind farms in the west of Ireland which are ready to go but are stalled because the transmission system is not strong enough to get power from where it is generated to where it is needed.”

“We know the electricity grid on Ireland’s east coast can only take another 1½ gigawatts (GW) of renewable energy yet the climate action plan aims for 3½ GW of offshore wind by 2030 and the programme for government increases that ambition to 5GW.”

The programme also commits to pursuing a potential 30GW of offshore floating wind power in deeper waters in the Atlantic. It also backs development of innovative transmission and storage technologies, such as high-voltage, direct-current interconnection and “green hydrogen” made by using electricity from renewables.

Dispatch down (when renewabl energy providers are told to cut or stop supplying electricity) figures have been rising steadily and unless the grid is reinforced they’re going to continue to rise, predicted Mr Connolly.

“In parts of Ireland where constraints are particularly severe, like the west and southwest, we know of wind farms that are stalled simply because they can’t get the power out on to the system.”

The CRU is due to set five-year budgets for EirGrid and ESB Networks shortly. “If they are not given the resources they need to build a 21st century electricity grid then no amount of wind farms or solar farms will be enough to hit our 2030 targets. Industry will not build wind farms to sit idle,” he added.

ESI chairman Sam Harden said engineers and researchers in EirGrid and ESB Networks had achieved what was previously thought impossible, raising the limits on integration of renewables so up to two-thirds of electricity demand can be met with renewable energy at any one time, “but momentum has stalled and these limits are increasingly forcing the curtailment of renewable generation . . . we are losing more renewable electricity every year. This means more fossil fuels and more CO2 emissions.”

A much strengthened grid was needed, Mr Harden added, with deployment of new zero-carbon technologies, particularly to replace expensive fossil-fuel generators used to provide back-up services to the grid.

“Battery storage, new interconnectors and demand response can end our reliance on fossil fuels . . . This will save the electricity consumer €117 million annually by 2030 and could cut Ireland’s CO2 emissions by two million tonnes every year,” he said.

An electricity grid and market designed for coal and peat is unfit for a future where 70 per cent of our annual electricity demand is coming from wind and solar, said Mr Harden. “These renewables, supported by storage technology, can deliver a safe, secure, reliable and fossil-free electricity system.”

The report is the second element of a four-part IWEA series contributing to a 70by30 Implementation Plan, identifying policy and technical changes needed to achieve 70 per cent renewable electricity at lowest cost to the consumer.

The level of dispatch down was “a here and now problem”, said Mr Connolly, citing wind projects with full planning and grid access when developers decided not to proceed because they were “afraid they would be turned off so often”.

Addressing the issue would ensure cheaper renewable electricity was available in Ireland, he said.

Dispatch down can occur in a specific area where so much electricity is being produced in a county that the system cannot transport it from there to where it is needed. This form of dispatch down is known as a constraint.

It can also occur at a system-wide level. To ensure the secure operation of the electricity system, EirGrid limits the share of electricity demand which can be met by renewable energy at any one time to 65 per cent. If the electricity provided by wind farms goes over this limit they are dispatched down – a measure known as curtailment. EirGrid expects to increase this limit to 75 per cent by 2021.

Analysis carried out by MullanGrid estimates that, for 2019, dispatch down cost wind farms approximately €50 million in lost revenue. “This also led to more of Ireland’s electricity demand being met by fossil fuel generation which meant higher power sector emissions and system costs,” the report highlights.

Demand response, also known as demand-side engagement, is where a medium or large energy user agrees to reduce their electricity demand at the request of transmission operator, such as EirGrid, to help alleviate pressure on the electricity system.