SSE hopes to build offshore wind farm in Ireland by 2025 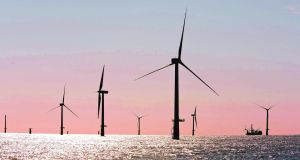 The Scottish utility SSE plans to build an offshore wind farm in the Arklow Bank by 2025. Photograph: Reuters

Scottish utility group SSE has said it hopes to build an offshore wind farm off Ireland by 2025. The company’s Arklow Bank project of at least 520 megawatts (MW) was recently added alongside a list of projects to be fast-tracked by the Irish Government.

SSE is also eyeing the growing area of floating offshore wind farms that could allow development in vast new areas of the world, such as Japan, Korea and the US west coast, where the seabed is too deep for traditional fixed installations.

SSE is planning an expansion of its renewable power business to compete globally for the growing market for massive wind farms. “I’d like to see us become a global supermajor,” Mr Smith said. “Who wouldn’t if they were running our business?”

While it has become one of the biggest developers in the UK, the largest market for offshore wind farms, SSE has been slow to branch out of its home territory. With construction set to begin on a number of developments, the company is eyeing growth in a space where seasoned competitors like Denmark’s Orsted and Spain’s Iberdrola are already competing for market share.

SSE plans to expand its wind business into two more markets within the next five years, Mr Smith said.

It’s looking at opportunities in northern Europe, the US and Japan, he added.

With a record-low bid last year to build a giant wind farm off the coast of England, the company has shown that it knows how to win competitive government auctions to build the green power plants at sea.

For offshore wind SSE would look to partner with a local developer in whatever market it moves into to work on a project at an early stage. For wind farms onshore, the company is looking to acquire a developer with a pipeline of projects at various stages of progress and about 1 to 2 gigawatts of capacity, Mr Smith said.

“We are continuing to look at a few markets, and when the right opportunity comes along we will make a move.”

For now the company is focused on delivering on a huge pipeline of projects. Last year SSE and Norwegian energy company Equinor won a joint bid to build the world’s biggest wind farm at sea, the 3.6-gigawatt Dogger Bank.

The company also recently made final investment decisions on two other massive wind projects: a 443MW wind farm on the Shetland Islands in Scotland, and a 1.1-gigawatt Seagreen installation off the Scottish coast.

In total SSE plans to invest £7.5 billion (€8.3bn) by 2025 in projects that will cut greenhouse gas emissions. It has said that its balance sheet and divestments can support this growth, and that capital and investment spending on less strategic or less advanced projects would be deprioritised or deferred.

“We’ve got a lot on our plate to deliver,” said Mr Smith. – Bloomberg