Ireland’s natural gas reserves will run out by the middle of the decade, potentially leaving the country relying entirely on imports 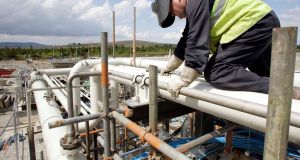 Ireland’s natural gas reserves will run out by the middle of the decade, potentially leaving the country relying entirely on imports for the fuel that provides most of its electricity.

GNI, which is responsible for the network of pipes that supplies gas to around 700,000 homes and businesses, is building a centre in Brownsbarn, Dublin, that will test hydrogen’s suitability for use on its system.

Burning hydrogen produces no carbon-dioxide – primarily responsible for climate change – while it can be produced with no greenhouse gas emissions.

The EU recently singled it out as a potential replacement for fossil fuels in transport, industry and energy storage.

GNI will begin testing it next year. The company plans to test the suitability of pure hydrogen and blends of the fuel with natural and renewable gases on its network.

Tests will focus on establishing how to transport the gas safely. GNI will work with the State’s utilities regulator to design the process through which producers can supply the fuel and the standards that they will have to follow. The company’s pipes are already suitable for transporting the gas.

GNI believes it can be used to heat homes and businesses, in industry, transport and for generating electricity.

Head of operations James Burchill confirmed that hydrogen was a key part of the company’s plans to develop a “carbon-neutral” network by 2050.

He said international studies showed that the gas could play a significant role in future energy supplies. “Developing this test facility is a first step in identifying how hydrogen can be safely introduced into Ireland’s gas network.”

Natural gas is needed to generate around 60 per cent of Ireland’s electricity. Wind and solar power are expected to cut this to 30 per cent by 2030, but electricity consumption will continue growing, so the country will continue to need gas.

The Corrib field off the west coast supplies around two-thirds of the country’s natural gas needs. However, this reservoir will run out by the middle of this decade, potentially leaving us dependent on exports from the North Sea and Europe via a pipeline running from Scotland.

A recent European Commission strategy document says that rapid, large-scale deployment of clean hydrogen “is key for the EU to achieve a higher climate ambition”, cutting greenhouse gas emissions by up to 55 per cent before 2030.