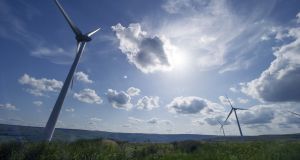 US investor I Squared Capital hopes to sell Irish energy group Energia later this year in a deal worth €2 billion, according to reports on Wednesday.

Called Viridian Group until a 2019 rebranding, Energia, supplies gas and electricity to 750,000 customers across Ireland, North and South.

A sale process for Energia is expected to begin later this year, subject to market conditions, according to Reuters, which quoted sources familiar with the matter. I Squared and Energia declined to comment.

I Squared acquired Energia, Ireland’s second largest energy group, in 2016 for €1 billion and unsuccessfully tried to sell it in 2018.

Last year, Energia embarked on a €3 billion expansion designed to cash in on the Government’s push to boost green energy.

The power group earmarked €600 million for new wind farms, built a plant to convert waste to energy and was also weighing plans to produce hydrogen, which can be used for transport and power generation.

The group announced details of its investment shortly after the Government launched its Climate Action Plan, which committed to providing further price supports for wind energy and solar power.

Energia predicted that its investment would create up to 200 jobs and make it a leading Irish green energy supplier.

At the time Energia chief executive Ian Thom said that I Squared, along with pension and sovereign wealth funds whose money it invests, supported the Irish group’s plans.

“They have supported the development of renewables right across the globe, north America, Spain, Ireland and India, ” he noted.

There were no indications on Wednesday of how a possible sale could affect the company’s spending plans.

Energia owns the Huntstown power plants in north Co Dublin, along with enough wind farms to supply more than 300,000 homes. The company employs about 450 people.

In the 12 months to March 31st, Energia Group generated earnings before interest, tax, depreciation and amortisation of €157.2 million, and had net debt of €714.3 million at that time, according to its annual report.

Reuters suggested that European oil producers, seeking to shift from fossil fuels as they aim to make themselves broader energy businesses, could emerge as a new group of possible buyers for the Irish company.

BP said last week it planned to reduce its oil and gas production by 40 per cent by 2030, while massively expanding into renewable energy.

European utilities, seeking a foothold in the Irish market, where the Government has recently boosted support for renewable energy, could also bid for Energia, were I Squared to confirm plans for a sale. – Additional reporting: Reuters