Energy firm sees drop of 22.5 per cent in year to March 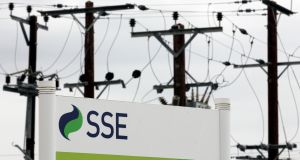 SSE Airtricity, which said it had 740,000 household and business customer accounts in the Republic and Northern Ireland, linked the decline to increased competition and increased energy costs.

Profits at energy firm SSE Airtricity, one of the State’s largest electricity and gas suppliers, fell by 22.5 per cent to £33 million in the year to the end of March.

The company, which said it had 740,000 household and business customer accounts in Ireland, linked the decline to increased competition and increased energy costs.

“Since we entered the market here in 2008, we’ve grown to become the second largest energy utility, and leading developer and generator of renewable energy, on the island,” Stephen Wheeler, managing director of SSE Ireland.

“In that time, we’ve directly invested over €2.5 billion in the development of Ireland’s sustainable, low-carbon energy infrastructure, with four new onshore wind farms in the last 16 months, including Ireland’s largest in Galway,” he said.

Mr Wheeler said the company was progressing plans to fully develop our Arklow Bank Wind Park project in the Irish Sea, which would represent an investment of over €1 billion and deliver a minimum of 520 megawatts of capacity.

A study ommissioned by SSE and conducted by PwC revealed that SSE contributed €806 million to Irish gross domestic product (GDP), equivalent to 0.3 per cent of GDP.

Profits at UK-listed parent SSE took a knock last year as it lost 430,000 customers and was stung by charges linked to the merger of its retail arm with rival Npower.

SSE pointed to competitive pressures as it saw the number of domestic energy accounts fall from 7.23 million to 6.8 million. Operating profit at its household supply business was flat at £260.4 million, despite higher energy consumption in the final quarter as customers turned up the heat to combat the Beast from the East.

“The challenges will continue in 2018/19, which is also expected to be a year of major transition for SSE. - Additional reporting by PA