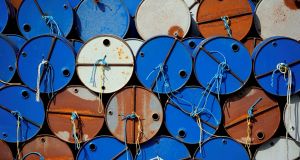 The rise in price follows 16 months of supply cuts by Opec and Russia that have removed at least 1.8 million barrels a day from the market. Photograph: Regis Duvignau/Reuters

Oil prices climbed towards $75 (€61) a barrel on Thursday, hitting the highest level since 2014 and taking the rally over the past year to almost 50 per cent, with traders pointing to tightening supplies at a time when political risks to the market are mounting.

The rise in price, which has spurred a sharp rally in energy shares, follows 16 months of supply cuts by Opec and Russia that have removed at least 1.8 million barrels a day from the market.

That has mopped up the worst of the oil glut that hammered prices four years ago, with Saudi Arabia, Opec’s de facto leader, showing little sign of moving to cool the rally as it tries to fund an ambitious – and expensive – programme of economic and social reform.

But the latest leg up over the past two weeks has largely reflected rising political risk, traders say. Tighter supplies in the market increase the importance of production threats, ranging from Venezuela’s economic collapse to the risk of the US reimposing sanctions on Iran’s oil exports.

Brent, the international benchmark, touched $74.75 a barrel on Thursday, having gained 10 per cent since the start of this month.

“Geopolitics have a much bigger impact when the market is already tightening,” said Amrita Sen at Energy Aspects in London. “We were already forecasting a supply deficit in the second half of this year, which would further draw down inventories, before factoring in the risks from Venezuela, Iran and increasingly Libya. ”

These three Opec members have drawn increasing attention, overshadowing a recovery in the US shale oil industry, whose surging output has so far failed to derail the rally as it appears to have been largely absorbed by the strong global economy and oil demand growth.

Venezuela’s output has dropped to a 30-year low as an economic and political crisis has hampered operations at its state oil company. Iran, which has raised output since the 2015 nuclear deal eased sanctions against its oil industry, faces the prospect of US president Donald Trump abandoning the deal next month.

Libya, where output had stabilised to about one million barrels a day, faces a potential power vacuum with General Khalifa Haftar – whose forces control the east of the country and the major oil export points – reported to be in hospital in Paris, having suffered a serious illness.

“The current move up is almost exclusively aided by geopolitical events,” said Tamas Varga at oil brokerage PVM in London.

Traders are also watching a technical meeting between key Opec members in Jeddah this week where they will be reviewing the progress of the oil supply cuts deal.

The oil cartel, having largely met its official target of drawing down once bloated oil inventories, has been quietly shifting the goalposts to other measures, increasingly talking up the need to encourage investment in future supplies.

There have been reports Saudi Arabia is targeting a price of $80 (€65) a barrel or even higher, though the kingdom’s oil minister Khalid Al Falih and his advisers have avoided naming a precise target.

Analysts see this as Saudi Arabia signalling that it is comfortable with the rally and will not take efforts to slow it, though it is also seen as unlikely to take additional measures beyond the existing supply curbs.

Saudi Arabia is believed to want strong prices partly to boost the valuation of Saudi Aramco, its state oil company, which it plans to list a portion of in an initial public offering that is the cornerstone of Crown Prince Mohammed bin Salman’s economic reforms.

The biggest threat to the rally, beyond an easing in tension in the Middle East, remains the US shale sector. US benchmark West Texas Intermediate hit a post-2014 high of $69.56 a barrel on Thursday, which should spur additional drilling in the sector.

Prices in the Permian basin, the largest US shale field in west Texas, have fallen to a discount to the benchmark, however, as soaring output growth is pushing up against infrastructure constraints to get the oil easily to market.