Mainstream sells Scottish project to France’s EDF for over €600m 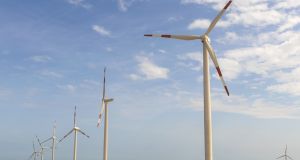 The jump in the value of the Neart na Gaoithe 450MW project, capable of powering all homes in a city the size of Edinburgh, comes as the cost of developing offshore wind farms has fallen in recent years. Photograph: iStock

Mainstream Renewable Power, the green energy group founded a decade ago by entrepreneur Eddie O’Connor, has sold a wind farm project off the Scottish coast to French utilities giant Électricité de France (EDF) for a price understood to be in excess of €600 million.

It represents a multiple of an abortive €100 million deal struck two years ago on the project, and justifies a decision by Mainstream last year to scrap a plan to raise $150 million (€125.3 million) by selling a stake in itself to unnamed US-based investors.

The deal will also pave the way for the long-awaited commencement of a grey market for Mainstream shares later this year, ahead of a stock market listing at the end of the decade. The company has raised almost €200 million since it was set up in 2008, including €74 million from Irish high-net-worth investors.

The 2016 Scottish transaction fell through as a bird protection charity mounted a legal challenge against such developments. However, the Royal Society for the Protection of Birds (RSPB) in Scotland failed last November to get leave to pursue a final attempt through the UK supreme court to block offshore wind farms originally approved by Scottish ministers in 2014.

The jump in the value of the Neart na Gaoithe 450MW project, capable of powering all homes in a city the size of Edinburgh, comes as the cost of developing offshore wind farms has fallen in recent years, while the scheme benefits from a 15-year, inflation-linked power supply deal struck three years ago at 2012 prices. The most recent such deals have been set at half that rate in the UK.

In addition, there has also been a surge of interest among major utility groups recently in offshore assets, pushing up valuations for the few projects in Europe being developed by independent operators with permits in place.

“We are very pleased to be bringing in such an established partner, and support of the Scottish energy industry in EDF Renewables, to this vital infrastructure project for Scotland,” said Mainstream chief executive Andy Kinsella. “The completion of this sale adds to Mainstream’s global track record as the leading independent developer of some of the most significant and complex wind and solar projects across Europe, South America, Africa and Asia.”

Mainstream has 160 staff across four continents who are focused on delivering more than 7,000MW of wind and solar assets in construction and development, including a 1,300MW Chilean scheme being developed on foot of contracts won by the company from the country’s government in 2016.

The company has delivered 600MW of renewable power assets into commercial operation in South Africa and is about to start construction of another 250MW project in that market in the coming weeks. In Asia, it is developing large-scale projects in Vietnam and the Philippines.