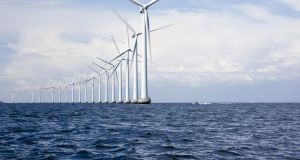 “Ireland should establish the necessary framework to deploy offshore wind in Irish waters as soon as possible,” Statoil told the Department of Communications, Climate Action and Environment. Photograph: iStock

Ireland has an “enormous potential for offshore energy developments”, oil major Statoil told the Department Communications, Climate Action and Environment in advance of a meeting with Minister Denis Naughton earlier this year.

Documents obtained by The Irish Times show the Norwegian multinational believes now is a “pivotal time for Ireland to bring offshore wind into the energy mix”.

A briefing note prepared for Mr Naughton by the company before a meeting in January detailed how Statoil believes that offshore wind generation may be required to reach decarbonisation targets, “support economic growth and diversify Ireland’s energy sources”.

It promoted its own record in the wind generation sphere, noting “Statoil is the only offshore wind developer that has experience in developing both bottom-fixed and floating offshore wind projects”.

Both in Norway and the UK, it is on track to deliver energy to 1 million homes by the end of this year directly from offshore wind technology, the company said.

Statoil’s recommendation is that “Ireland should establish the necessary framework to deploy offshore wind in Irish waters as soon as possible”, according to the briefing document.

At a meeting in January with the company, Mr Naughton explained that he had a “strong personal interest in progressing renewable energy”, a note of the meeting shows.

Statoil is one of a number of oil majors diversifying their business in a push into green energy. In March, the company announced it was rebranding to Equinor, reflecting its commitment to become a broad energy company rather than one focused only on oil.

The proposal to rebrand will be put to shareholders at the company’s annual general meeting on May 15th, but Statoil said it already had the backing of the Norwegian state, which has a 67 per cent stake in the company.

In its discussion on Ireland, Statoil, which has solar assets in Brazil and France, noted great potential for clean energy development in the marine area of Ireland as well as the coastal employment and economic opportunities available.

Statoil already has interests in Ireland. It has a share of the Corrib gas field off the coast of Mayo and has various exploration licences from the State. In 2006, it sold its network of service stations in Ireland to a company that later became known as Topaz (which is currently being rebranded as Circle K under new ownership).

The meeting with Statoil comes as the Department of Communications, Climate Action and Environment develops a new renewable electricity support scheme designed to assist Ireland in meeting its renewable energy contribution to EU targets.

Ireland is due to meet 16 per cent of its energy needs from renewable sources by 2020, however, it is expected to miss those goals along with three other European countries.