Amarenco Solar to expand its presence in Europe 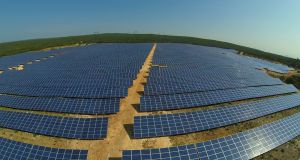 Solar panels developed by Amarenco Solar: the firm is expected to invest €50m in the next number of years as it expands in Europe

Irish renewable energy firm Amarenco Solar is to expand its presence in Europe with the development of solar barns in France and Corsica.

The company, which has a considerable presence in the French renewable energy market, has also begun development in the French territories of Guadeloupe and Martinique in the Caribbean and Reunion in the Indian Ocean off the east coast of Africa.

The solar barn developments are being carried out in collaboration with local partners in each of the island territories and are expected to be operational from 2019. The combined investment in the three territories is expected to be €50 million in the next number of years.

Solar barns are almost exclusively built for the agriculture sector and capacities vary between 100kW and 500kW based on the footprint of the barn.

“We are very pleased with this expansion of our international footprint beyond Europe and clearly the work we have undertaken in France, where we are recognised as a credible and significant contributor to that nation’s demand for solar renewable energy,” he said.

“We are one of the largest developers in Corsica and this is of benefit in expanding into French territories further afield.”