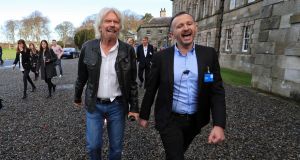 Mr Branson called on governments to act on climate change, saying: “It’s an extremely easy thing for government to do, through taxation of dirty energy. It’s worked with cigarettes and it can work with climate change.”

The Cool Planet Experience, the brainchild of entrepreneur and owner of Crowley Carbon, Norman Crowley, is the first of 10 permanent visitor centres aiming to present the “true story of climate change” planned for locations around the world over the next three years. It aims to give a glimpse into what the planet will look like in 50 years “if we continue business as usual by burning fossil fuels and clearing rainforests at the current rate”.

With extreme weather rooms and a model city that needs to be saved from disaster, the Cool Planet is the first of its kind and promises to engage people in the issue in an interactive and fun way.

“The Irish Government in general has been slow to make constructive changes because climate change does not seem a big issue to them,” Mr Crowley said. “As a result of this, in Ireland we are way behind our targets for 2020 which means we are due to be hit by over €500 million in EU fines between now and 2020,” he added.

Mr Branson said that all governments have to do is tip the balance to clean energy over dirty energy. “Fuel prices have gone up quite a lot in the last four months, if we’d actually had more clean energy then fuel prices wouldn’t have gone up. Once we’ve got the world powered by clean energy we’d effectively have fuel prices at $30 (€25) per barrel,” he added.

Mr Branson singled out entrepreneurs, saying that the battle being faced is also a tremendous opportunity.

“Wouldn’t it be wonderful if in 20 years’ time everything is powered from the sun, the wind, [and] wave power,” he said.

Vicky Brown, chief executive of the experience, said the company plans to open in two more locations by the end of the year.

“We want to make sustainable so cool that it becomes the norm – a way of life for the vast majority of us,” she said.

The Cool Planet experience will open to the public in mid-February and is located in a two-storey building beside the Powerscourt Gardens and the Avoca store and restaurant, which receive nearly 500,000 visitors a year. The Cool Planet curators hope to drum up a footfall of close to 45,000 in their first year.

While school tours to the centre are free, prices for children over seven start from €5 while adult tickets cost €10.

Commercial partners of the centre, who provided about €3 million in funding – €1.5 million of which was used to set up the centre – include Crowley Carbon, Calor, Vodafone, the NTR Foundation, ESB, Siemens, Glanbia and the Powerscourt estate.

1 Brexit: System agreed for Irish goods to skip checks on UK trade
2 High Court appoints interim examiner to Compu b parent company
3 Second Covid-19 outbreak and no-deal Brexit an appalling vista
4 David McCullagh announced as co-host of RTÉ Six One News
5 Why are markets booming when a crash is on the way?
6 How much do Irish people earn? And what will Covid-19 do to our wages?
7 Ireland faces 'deep downturn' this year and may not rebound until 2024 if there is a second wave
8 Rosslare Europort in line for €30m upgrade from Irish Rail
9 ‘The rental situation stops me moving back home’
10 Could your old car be giving away all your secrets to its new owner?
Real news has value SUBSCRIBE