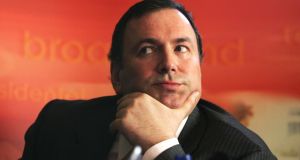 San Leon Energy, the Dublin-based oil and gas explorer led by former stockbroker and telecoms entrepreneur Oisín Fanning, said on Friday that two Chinese suitors that had been circling the company had walked away.

Chinese group Geron Energy Investment had been in takeover discussions with San Leon for more than 12 months, while China Great United Petroleum (CGUP)’s interest in the company was disclosed last June.

The London-listed company said it remained in talks with Africa’s Midwestern Oil and Gas, its partner since 2016 in a vehicle that holds an indirect stake in a Nigerian onshore oilfield, on a deal that would involve Midwestern reversing its interest in the asset into San Leon.

Shares in San Leon have been suspended since these discussions were first disclosed on November 3rd.

San Leon holds an indirect 9.72 per cent indirect interest in the so-called OML 18 operations in Nigeria, where production was running last year at 56,000 barrels a day, by way of a complicated deal executed in 2016 when it backed Midwestern in securing a wider interest in the oilfield.

Meanwhile, San Leon’s largest shareholder Toscafund, a UK hedge fund headed by Martin Hughes, who is known in investment circles as “the Rottweiler”, increased its stake to 62.3 per cent this week.

This came as Toscafund converted into shares a £11 million (€12.4 million) loan it gave to San Leon last month to help settle a drawn-out legal dispute with Avobone, a former partner in a Polish asset.

“While I think both CGUP and Geron for their interest in San Leon, I am pleased that we have been able to provide this update to shareholders today,” said Mr Fanning, San Leon’s chief executive.

“These discussions have come to a conclusion by mutual agreement, which will allow the company to move on, both with its discussions with Midwestern, and with the delivery of its business plan, which is focused on cash generation from our oil and gas operations in Nigeria.”