Maersk takes step towards breaking up with sale of oil unit

Sale of Maersk Oil to Total for $7.5bn is one of four planned transactions by Danish group 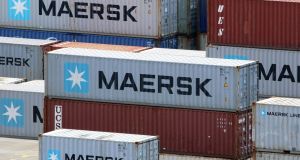 Maersk is splitting itself up because the rationale for being a broad-based conglomerate had been shown to be wrong-headed after the financial crisis. Photograph: Focke Strangmann/EPA

AP Moller-Maersk has taken not just its first step but also its biggest stride to breaking itself up.

The $7.5 billion sale of Maersk Oil to Total of France is just one of four transactions the Danish group is set to do in the next year to sell off its energy businesses and focus on transport and logistics.

But analysts expect the other three – its drilling rig, oil tankers and supply services businesses – to fetch about the same amount of money combined.

Just 11 months after announcing one of the most radical restructurings of a European industrial heavyweight, chief executive Søren Skou struck a satisfied figure.

“Clearly, for us, it’s a good day. We are getting full value for Maersk Oil. We are making material progress on the plans we made last year to focus our business on container shipping, ports and logistics,” he said.

Shareholders agreed, sending Maersk shares up 4 per cent to 3,310 Danish kroner. The consensus estimate among analysts was that Maersk Oil was worth $6.3 billion.

“This marks the break-up of the conglomerate for a better price than expected. So the hidden value is becoming clearer,” said David Kerstens, analyst at Jefferies.

Maersk is receiving $4.95 billion in Total shares as well as pushing down $2.5 billion of debt from the parent company into Maersk Oil.

Subject to maintaining its investment grade credit rating, Maersk said it would return a “material portion” of the $5 billion in Total shares to its own investors either through an extraordinary dividend, share buyback, or distribution of the shares themselves.

Mr Kerstens estimated that if all the $5 billion were returned in one go, it would be the equivalent of a 12 per cent yield on Maersk’s shares.

AP Moller Holding, the family investment company that is Maersk’s leading shareholder, is likely to remain invested in Total, according to sources.

The deal is the second large one Mr Skou has struck since becoming chief executive last summer.

He is in the process of bulking up the world’s largest container shipping group, Maersk Line, by purchasing Hamburg Süd for about $4 billion.

“With these two transactions, we are progressing well on reshaping the company on shipping and logistics,” Mr Skou said on Monday.

Maersk is splitting itself up because the rationale for being a broad-based conglomerate had been shown to be wrong-headed after the financial crisis. “The idea was that Maersk Oil was a natural hedge for Maersk Line – that didn’t work,” said Mr Kerstens.

But the twin deals raise the focus and pressure on the remaining shipping and logistics assets, which include the APM Terminals business that operates many of the world’s ports. For instance, in 2016 Maersk Oil was the division with the highest profits, making $477 million against $438 million for APM Terminals and a $376 million loss for Maersk Line.

Maersk is in some ways lucky with the timing because just days before the sale to Total it announced second-quarter results that showed Maersk Line back in the black for the first time in a year. Mr Skou declared then that container shipping conditions were as good as they had been since the financial crisis.

Much of this is due to an improvement in freight rates after a price war last year, and much of that is a result of a big consolidation among container shipping groups that has seen the top 20 reduced to 12, with Mr Skou predicting only five or six will be left in a decade.

Mr Skou said Maersk felt that it had better chances in container shipping – where it transports 15 per cent of the world’s seaborne freight – and logistics than in energy where it was something of a bit player, especially after losing a crucial oilfield in Qatar, ironically to Total. “Shipping and logistics is where we have the best chance of succeeding and where we think the best growth chances are,” he added.

The remaining disposal of Maersk Drilling, Maersk Tankers and Maersk Supply Services are likely to be tougher, whether through sale, merger or listing, analysts said. The three had combined revenues of $629 million in the second quarter but a total loss of $465 million due to a big writedown at the tankers business.

He added that the sale of Maersk Oil could buy the Danish group some time and goodwill with investors over the separation of the other three energy businesses.

“The remaining assets will be more difficult to separate. They are all operating in a worse environment than oil. For instance, globally about 50 per cent of the drilling fleet is idle,” he said.

1 Bank leaked my loan request to family who tried to rip me off
2 Eason acquires rival Dubray Books for undisclosed sum
3 Solar panels: Are they worth the investment?
4 Can I see my father’s previous wills?
5 Accumulated profits at David McWilliams’ media company hits €675,000
6 Average weekly wage rose to €783 in final quarter of 2019
7 Siblings who became ill next to wind farm settle case
8 Ryanair and Aer Lingus monitor impact of coronavirus on travel to Italy
9 How can I view my dead brother’s will if I’m not the executor?
10 When the Chemistry no longer works – the closing of a leading Irish ad agency
Real news has value SUBSCRIBE