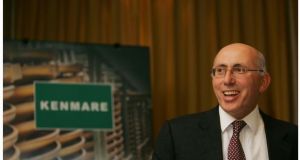 Dublin and London-listed mining firm Kenmare Resources said it reached record shipments in the final months of its fiscal year 2019 and hit a record for excavated ore during the full year.

But the company narrowly missed production targets for ilmenite, finishing the year at 892,900 tonnes, less than 1 per cent below the lower end of its original production guidance of 900,000 tonnes. The total produced last year was 7 per cent lower than in 2018.

Other products achieved their original guidance. Production of heavy mineral concentrate was 1,202,100 tonnes in 2019, a 12 per cent decrease on 2018 on lower ore grades, while primary zircon production was 46,900 tonnes.

Kenmare said concentrates production was 40,200 tonnes, a 43 per cent increase year on year. The increase was attributed to the introduction of a mineral sands concentrate product in the fourth quarter of 2018, along with the reprocessing of tailings stockpiles.

In total, the company said its annual excavated ore hit a record of 36.8 million tonnes in 2019, the fourth year of increase. Total shipments of finished products were 1,029,300 tonnes, 4 per cent down from 2018.

“In 2019 Kenmare continued to advance its outlined strategy of delivering growth, margin expansion and shareholder returns,” said Michael Carvill, Managing Director. “We are targeting ilmenite production of 1.2 million tonnes per annum from 2021, to be achieved through increased mining capacity and higher average ore grades.”

“These growth projects are expected to enhance our margins, provide stronger cashflow stability and position us in the first quartile of the industry revenue to cost curve,” said Mr Carvill. “ Following the completion of the capital expenditure programme, free cash flow will also benefit significantly.”

Kenmare paid its first dividend to shareholders in the fourth quarter of 2019, and negotiated new debt facilities with lenders to support the growth of the business.The company said the terms of the loan would give it greater flexibility.

Kenmare had $13.7 million of net cash at the end of the year.

“The full year production outcome is best seen in the context of a two-year transition period, during which the group is trying to expand production and hold existing output at the same time. This requires a careful choreography of investment and production, which it has almost, but not quite, achieved and we have adjusted forecasts accordingly,” analysts at Davy said in a note. “That said, the group still managed product sales of over 1 million tonnes, the balance sheet remains very strong and ilmenite product markets continue to have an upward pricing bias.”