US shale growth and global economy concerns hold back gains 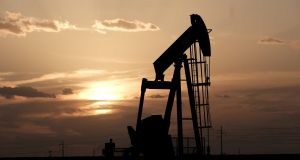 Brent crude oil jumped back above $65 (€58) a barrel on Friday for the first time since the attacks on Saudi Arabia in September, as production cuts by oil producers and progress on the US-China trade deal boosted buying ahead of the weekend.

The international oil benchmark is on course to average about $64 a barrel this year, more than 10 per cent less than in 2018, with prices subdued by continued growth in US shale production and concerns over the strength of the global economy.

But crude has risen over the past week after Saudi Arabia led the expanded Opec+ group of oil producers in announcing larger than anticipated production cuts on Friday last week, in an effort to underpin the market and tighten supplies.

Crude has also taken support from broader markets amid reports that Beijing and Washington are close to agreeing a deal to delay tariffs that were set to start this weekend, raising hopes the world’s two largest economies will not deepen their trade war.

Opec+ has signalled it “will hold the market through a potential surplus in the first half of 2020”, said Bjarne Schieldrop, chief commodities analyst at SEB. “Oil demand growth will likely rebound along with a rebound in global manufacturing.”

Brent crude reached a high of $65.29 a barrel in Friday morning trading. Later in the day, US benchmark West Texas Intermediate hit $60 a barrel for the first time in three months.

Some analysts are still cautious about the potential for further gains, however, as crude has consistently failed over the past two years to maintain rallies above $70 a barrel, given the growth in supplies from the US.

More traders are now betting that American shale production could slow in 2020, after a period of lower prices and signs the industry is no longer prepared to spend so aggressively to fund growth. But they do not expect the market to tighten dramatically.

Stephen Brennock, an analyst at the PVM brokerage in London, said that while “a layer of uncertainty” had been removed from the economic outlook, “it remains to be seen whether the return of the feelgood factor is enough to set oil prices on a definitive northerly trajectory.”

Opec’s own projections suggest the market will be relatively balanced in 2020, but the International Energy Agency this week warned it still saw a large surplus in the first half of the year, with output growth in Brazil and Norway as well as the US.

Traders have become slightly more optimistic about the strength of demand growth, however, which has languished this year as India’s economic expansion has slowed and trade jitters have rattled global markets.

That has left the market finely balanced heading into 2020, with some traders arguing crude could eventually break out of its recent range near $60 a barrel. – Copyright The Financial Times Limited 2019

1 Farmer seeks to challenge €3.6bn Intel plan in High Court
2 Who are Ireland’s 17 billionaires?
3 Council tells Johnny Ronan firm to keep the noise down at D4 Embassy venue
4 Ten of the most mysterious aircraft disappearances
5 Davos 2020: Worlds of Trump and Thunberg collide on a Swiss mountainside
6 Parties shred pension reform in pursuit of votes
7 Are there annual limits on inheritances or gifts to a child?
8 Cosgrave should give his speech to Web Summit’s partners in Saudi Arabia
9 Help, I’ve no PRSI stamps – can I still get a pension?
10 Auction politics: Can we afford to pay for the parties' election promises?
Real news has value SUBSCRIBE