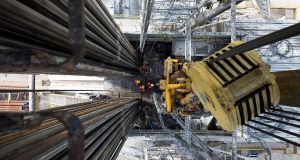 Oil prices fell by a further 3 per cent on Friday, after prices had crashed to five-month lows in the previous session, as concerns about global oversupply wiped out all of the price gains since Opec’s move to cut output.

US West Texas Intermediate (WTI) crude oil futures were trading at $44.14 per barrel earlier, down $1.39 or 3 per cent, after a more than 4 per cent drop the previous session.

WTI futures have fallen below prices when Opec cuts were agreed in late November, and are at their lowest since November 14th.

Brent crude futures, the international benchmark for oil prices, were at $47.05 per barrel, down $1.33 or 2.8 per cent from their last close. Prices fell to as low as $46.64, the lowest since November 30th. Brent tumbled back below $50 in the previous session.

Brent and WTI are on track for their largest two-day percentage loss since February 2016.

“So far Opec’s strategy to draw down inventories has not worked. It seems obvious to us that Opec will need to keep the cuts in place for longer than the next six months if their strategy is to have any chance of success,” Neil Beveridge, senior oil and gas analyst at AB Bernstein in Hong Kong, said in a note to clients on Friday.

Crude is now back to levels last seen before Opec and other producers said they would cut output by almost 1.8 million barrels per day (bpd) during the first half of the year in a bid to tighten the market.

Other analysts agreed the steep price falls would likely force Opec members to extend production cuts later this month, but they said the prospect of deeper cuts appeared slim.

Doubts that the Opec-led cuts, even when fully implemented, are deep enough to draw down bloated storage levels around the world are also weighing on prices. Both Brent and WTI futures are down around 17 per cent for the year so far despite the Opec effort to support prices.

In a sign of ongoing oversupply, the amount of oil stored on tankers in Malaysia’s waters has surged again recently, after drawing down slightly in March and April.

OPEC is scheduled to meet on May 25th to decide whether to extend the cuts.

“Any likelihood of an increase in the level of cuts remains slim, with Opec officials playing down this possibility,” said James Woods, global investment analyst at Rivkin Securities. – Reuters