Denis Naughten embraces solar energy but on his own turf 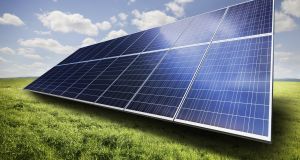 The Government’s slow take-up of green energy technology and its inability to curb emissions means the State is now almost certain to breach both its 2020 targets for emissions and renewables, making us something of a climate refusnik.

The Government’s engagement with the solar energy lobby here might generously be described as half-hearted; in reality it has been non-existent.

Years of lobbying for subsidies and State supports similar to those given to wind energy developers have fallen on deaf ears.

As a result, the Republic has no commercial solar industry while the UK, which enjoys the same level of sunlight, has the sixth-biggest solar industry in the world. In May last year, solar produced more electricity in the UK than coal for the first time.

If the solar advocates thought Denis Naughten’s tenure as Minister for Environment might have signalled a change in the Government’s seemingly singular focus on wind, they were mistaken.

In an address to the Irish branch of the Energy Institute last November, he all but ruled out a major adoption of solar, warning the technology could quadruple the renewable energy levy currently paid by consumers.

The Minister then snubbed an invitation to the Irish Solar Energy Association’s annual conference.

However, later on Thursday he will attend the launch of a joint ESB/Bord na Móna solar energy enterprise, the irony being that both companies are probably the biggest fossil fuel burners in the State. Both have significant operations in Naughten’s Roscommon-Galway constituency.

Their co-development agreement, billed as solar energy “grounded in nature”, aims to develop solar energy projects in the midlands, an area still being harvested for peat by Bord na Móna despite countless campaigns to preserve what’s left of our peatland habitats.

The Government’s slow take-up of green energy technology and its inability to curb emissions means the State is now almost certain to breach both its 2020 targets for emissions and renewables, making us something of a climate refusnik in European terms.

Solar advocates claim that a near-80 per cent drop in the costs of installing solar photovoltaic technology has changed the economics of the technology, but that the Government here is dragging its heels.

Naughten’s department is developing a new renewable energy support scheme, scheduled to be operational by the first half of 2018. Once the department’s analysis is complete, a consultation process will begin, but already the timeline is slipping.