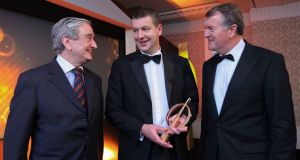 Revenue at quoted rish engineering group Mincon increased 34 per cent during the first quarter of 2017 compared with the same period last year.

The Co Clare-based firm, which specialises in the design, manufacture, and sale of rock-drilling tools and associated products, designed and manufactured the drill that secured access to 33 trapped Chilean miners in 2010.

The company said this year’s revenue increase was driven by sales volumes across all its main geographic regions.

Progress was particularly good in Africa, but strong growth was also seen in Australia, North America and Europe. On a constant currency basis, the growth amounts to approximately 25 per cent. The company did not provideany cash figures for its quarterly revenues. Full year revenues last year were €76.1 million on which it made a net profit of €9.2 million.

“Very little of this uplift was driven by acquisition uplift as we bedded down what we had previously bought and co-ordinated the businesses better in the second half of last year,” the company said in a statement on Friday.

“We also had a tremendous amount of new engineered products coming through and, while this added little to the sales in the first quarter, the future profitability of the group is determined, in large part, by additional and better-engineered product being our market advantage.”

Overall, due mainly to “the change in the sales mix”, gross margin came down a couple of points to 37 per cent from 40 per cent last year.

The operational gearing effect led to an operating profit for the quarter of 11.5 per cent, compared to 10 per cent for the same period last year.

The company achieved an Ebitda (earnings before interest, taxes, depreciation, and amortization) margin of 14.7 per cent.

The company also announced the acquisition of PPV Finland, which generated €3 million of revenue in 2016. The acquisition adds a large hammer to Mincon’s product range, which will open further market opportunities.

An analyst with Davy said the company had made a “great start” to the year. “Excluding currency effects, sales are 25 per cent higher year on year,” he said. “The operating margin has also increased by 150bps.

“The acquisition of PPV Finland has added more products to the company’s suite and further levers to the growth story. Notwithstanding the contribution from the acquisition, the risk to estimates looks firmly to the upside.”