Deal with BayWare to run 15 years and use 194-acre facility at Rasharkin, Co Antrim 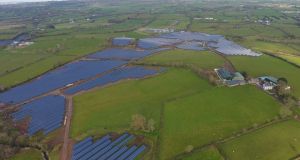 The 194-acre facility is located at Bann Road, Rasharkin, Co Antrim. SSE Airtricity will have the offtake of the renewable energy generated at the 46MW farm for a period of 15 years.

The facility will also produce enough clean energy from the sun to offset nearly a million tonnes of CO2 over its lifetime.

The agreement will run for 15 years and represents a further move into the solar power sector for SSE Airtricity, Ireland’s second-largest energy utility and provider of renewable power.

The announcement is the latest in a string of developments in the sector. On Tuesday, ESB and Bord na Móna said they would develop solar power in four locations in Roscommon and Offaly to power 150,000 homes.

Earlier this month, Electric Ireland announced it was moving into the residential solar power market.

SSE Airtricity already has experience in the sector after it developed a 1,400-panel, 420 kilowatt peak solar array on the roof of the Odyssey Complex in Belfast earlier this year.

SSE Airtricity head of market services Peter Lord welcomed the new deal. “We’re delighted to be partnering with BayWa for a project of this scale and significance,” he said. “At SSE Airtricity, we have a great deal of capability and experience in energy market trading, which makes us ideally placed for this.

“The agreement allows the solar farm at Bann Road to deliver clean, green energy for customers, while further securing SSE Airtricity’s proud position as the leading renewable energy provider on the island of Ireland.”

BayWa managing director for solar projects Benedikt Ortmann said he expected to see “a lot more growth” in the sector for Ireland.

“While we construct and operate solar parks globally, Bann Road marks our first solar project on the island of Ireland,” he said.

“The market here is in an early stage of development and we expect to see a lot more growth as the island of Ireland seeks to meet an increasing amount of its energy needs from renewable sources.

“It’s very gratifying to have brought this landmark project to fruition and we’re delighted to be working alongside SSE Airtricity.”