Oil near $46 a barrel after biggest surge in seven months 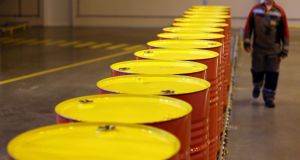 Oil had retreated for almost four weeks amid skepticism about the ability of OPEC to implement a deal at its November 30th meeting. Photograph: Andrey Rudakov/Bloomberg

Oil extended gains near $46 a barrel after its biggest surge in seven months as OPEC boosted efforts to finalise a deal to cut production agreed at a September meeting in Algiers.

Futures rose 0.6 per cent in New York after advancing 5.8 per cent on Tuesday, rebounding from their lowest close in eight weeks.

OPEC secretary-general Mohammed Barkindo will tour member states after meeting with Saudi Arabia’s minister of energy and industry Khalid Al-Falih in London, according to a person familiar with the talks. Russia plans informal consultations with members from OPEC in Doha from this week.

Oil had retreated for almost four weeks amid skepticism about the ability of OPEC to implement a deal at its November 30th meeting.

The group is seeking to trim output for the first time in eight years as Iran boosts production and Iraq seeks an exemption because of war with Islamic militants.

Prices will probably remain around current levels if OPEC fails to cut, according to BP chief executive officer Bob Dudley.

“We’ve had a very significant move down from near $52 to below $43, so it’s no surprise to see it bounce after that sort of decline.”

West Texas Intermediate for December delivery was at $46.08 a barrel on the New York Mercantile Exchange, up 27 cents, at 2.52pm in Hong Kong.

Total volume traded was about 61 per cent above the 100-day average.

Brent for January settlement was 34 cents higher at $47.29 a barrel on the London-based ICE Futures Europe exchange.