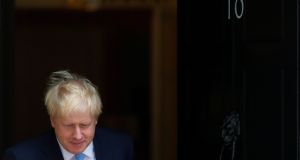 Irish consumer sentiment fell to a five-year low last month on the back of what KBC Bank Ireland economist Austin Hughes called “Boris blues”. The index dropped to 85 in July, a level not seen since November 2014, suggesting the mood of consumers pivoted downward with the arrival of Boris Johnson and his chief strategic adviser Dominic Cummings into No 10 Downing Street.

With Michael Gove, the other arch Brexiteer, mooting the possibility of closing the banks on November 1st, the day after the UK is scheduled to leave, there are strong signals the current UK administration may be hellbent on leaving on October 31st with or without a deal, even if it triggers several months of chaos.

Ironically the dial moved the opposite way in the UK with consumer sentiment moderately lifted by the new administration. This may reflect “the fact that Brexit is not of Irish consumers’ making while some of those UK consumers who voted for Brexit may believe it will have positive economic effects or may feel adverse economic effects may be outweighed by other consequences”, Hughes said.

He also calculated – using Central Statistics Office data and the UK equivalent – that the spending power of the average person (as measured by aggregate household disposable income per capita adjusted for inflation) is now stronger in the Republic than in the UK, relative to its pre-crisis 2007 level.

He noted that a substantial part of that relative improvement in Irish household incomes has occurred in the period since the UK’s 2016 Brexit referendum, a period that has seen strong growth here.

“However, through this same period, Irish consumers have become increasingly concerned about the risk that Brexit could prompt a renewed and substantial deterioration in their economic circumstances,” he said.

A case of swings and roundabouts it seems.