Day of reckoning Providence as Tony jnr steps down 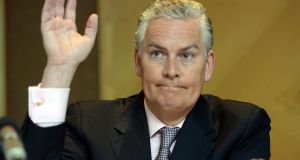 Tony O’Reilly jnr’s decision to resign from Providence Resources after 14 years ended an era of involvement in Irish plcs for his family. Photograph: Cyril Byrne

Tony O’Reilly jnr’s decision to resign from Providence Resources after 14 years was not unexpected given the company’s parlous financial state. It also ended an era of involvement in Irish plcs for his family.

His father, Sir Anthony O’Reilly, led Independent News & Media for more than three decades until stepping down in 2009 as part of an agreement with Denis O’Brien after a long period of dispute between the two sides.

O’Reilly snr was also a former chairman and major shareholder in Waterford Wedgwood before the collapse of the high-end crystal and ceramics maker in 2009.

Gavin O’Reilly, Tony jnr’s brother, succeeded his father at INM but lasted less than three years in the role. He now lives in the United States and is chairman of Red Flag Consulting, the Dublin-based public affairs consultancy led by Karl Brophy.

Tony jnr was deputy chairman of Waterford Wedgwood during his father’s time in control of the company, and was also a director of INM. His father had owned about 35 per cent of Providence before being forced into bankruptcy.

Tony jnr survived the departure of his father from the share register and there were fleeting moments when it appeared like Providence might be on the cusp of a big breakthrough in oil off the coast of Ireland.

But it never came to pass. Having being led a merry dance by a prospective Chinese investor for most of this year, Providence admitted defeat in September in relation to a promised $9 million injection of cash. Its technical and support staff were laid off.

In the statement announcing O’Reilly’s departure, Providence chairman Pat Plunkett noted how he had brokered partnerships with some of the world’s leading energy companies, including ExxonMobil, Eni, Chevron, Repsol, Petronas and Total”. However, he failed to execute successfully on any of those deals.

Providence racked up losses of €90 million between 2013 and the middle of this year, and it is now a penny stock. There are just two members of its board. It just remains for the vultues to pick over the carcass.