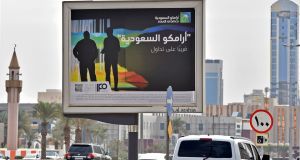 Saudi Arabia has sharply scaled back the initial public offering of its state oil company after international investors gave its ambitious plans a lukewarm response.

Based on a price range set on Sunday, Saudi Aramco will aim to sell shares at a valuation of $1.6 to $1.7 trillion (€1.5 trillion), which would make it the world’s largest publicly traded company by market capitalisation – a record currently held by Apple.

The kingdom will offer a 1.5 per cent stake to investors via a listing on its Riyadh’s Tadawul exchange, which it aims to complete as early as next month.

Mohammed bin Salman, the kingdom’s heir apparent, had initially sought to sell 5 per cent of the company, raising up to $100 billion. In recent months, this was scaled back to 1-3 per cent.

The issuance will seek to raise $24 billion to $25.6 billion for the government. The lower end of this range would amount to a smaller deal than the $25 billion raised by Chinese ecommerce giant Alibaba’s record IPO in 2014.

Saudi Aramco announced new details for its planned IPO on Sunday as it kicked off its international roadshow and began talking orders from investors.

The price range of 30-32 riyal per share suggests the kingdom has bowed to investor concerns about the $2 trillion valuation sought by prince Mohammed.

An inability to secure this target for the country’s largest revenue earner has dogged the company for the best part of four years, leading to a series of delays to the IPO.

But the announcement of a price range is the furthest the kingdom has gone in its pursuit of a stock market listing. If all goes to plan, Saudi Aramco could have non-government shareholders for the first time in nearly four decades by next month.

Initial meetings with international investors revealed scepticism about the high valuation sought for the company, according to people briefed on the discussions.

Advisers this week informed Saudi officials about a big gap in demand between domestic retail investors and foreign institutions, according to two people familiar with the process. “The issuer expressed high levels of dissatisfaction with what they were hearing,” said one of them.

Even as the company seeks investment from top-name foreign institutions, Saudi Aramco is scaling back its overseas roadshows. The kingdom believes it can achieve a $1.7 trillion valuation by banking heavily on demand from retail investors domestically as well as Saudi and other state funds, said one person close to the company.

Banks appointed to manage the offering have issued research with a wide range of about $1.1 trillion to $2.5 trillion, underscoring the difficulties of coming up with a valuation that would placate investors and Saudi authorities.

Overseas institutions suggested a $1.2 trillion to $1.5 trillion valuation would be more realistic for the company, which made $111 billion in net profit last year, according to bankers familiar with the process.

Saudi officials have visited China and Russia in recent weeks in a bid to underpin demand for the IPO from countries that have been keen to deepen ties with the oil-rich kingdom.

Saudi bankers report plentiful domestic demand for the issuance, with pressure on large families and institutions to apply for allocations of shares at the higher end of the valuation.

A wave of retail investment, sweetened with the issuance of bonus shares to Saudi nationals and ample bank lending for allocations, is also expected for the 0.5 per cent of shares earmarked for Saudis.

A bumper $75 billion-a-year minimum dividend that would prioritise non-government shareholders and new fiscal terms were among other measures taken to make the company look more attractive to investors.

The bookbuilding process began on Sunday. It ends for retail subscriptions on November 28th and for institutions on December 4th. The final price for the shares will be announced on December 5, just as oil ministers from Opec countries meet to decide oil supply policy for the next year.

Overseas investors have had concerns about security of energy assets after September’s devastating aerial assault on Saudi oil installations, as well as corporate governance questions given creeping state control over company strategy.

The part-privatisation of Saudi Aramco – after several false starts – is a litmus test for the crown prince’s ambitious economic reform programme that aims to reduce the kingdom’s economic dependence on oil.

Selling off a stake in Saudi Aramco could presage a broader privatisation plan for the kingdom’s assets as the state seeks to drive non-oil growth and create jobs for its young population.

Prince Mohammed has been keen to portray the share sale as a means by which the average Saudi investor can own a piece of the country’s crown jewel, hoping to secure a political win at home. – Copyright The Financial Times Limited 2019