Oil explorer has held talks on selling stake in prospect 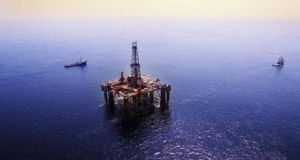 Providence claims that the Druid prospect has the potential to deliver 3.9 billion barrels of oil

Oil and gas explorer Providence Resources has hired UK-based Stena Drillmax Ice to drill an exploration well in a key prospect 220km off the southwest coast of Ireland in June.

Under the contract, Stena will operate a drill-ship above the so-called Druid and Drombeg exploration prospects, where exploration is due to begin in June. The operational rig rate is $185,000 a day.

“This is in line with [Providence’s] guidance earlier this year that a unit could be acquired to drill the Druid well at a cost of $35 million on a gross basis,” Davy analyst Job Langbroek said in a note.

Providence chief executive Tony O’Reilly said the contract “is a major milestone in the project plan to enable the drilling of this high impact exploration well during summer 2017”.

While a $70 million share sale by Providence earlier this year had provided it with the funds to drill in the exploration well, the company has also held talks on selling a stake in the asset. Mr O’Reilly said in July that this has attracted a number of “super major” oil groups.

Providence claims that the Druid prospect in the Atlantic ocean has the potential to deliver 3.9 billion barrels of oil. The Drombeg field, stacked 1km below Druid, may yield a further 1.9 billion barrels, the company has said.

Providence owns 80 per cent of the licence relating to the field, while London-based Sosina Exploration holds the remainder.

Separately, Providence is also seeking a partner for its Barryroe field, off the Cork coast, which is estimated to hold about 311 million barrels of recoverable oil.

A spokeswoman for Providence declined to comment on the state of the talks on the Barryroe and Druid fields, “for obvious corporate reasons”.

1 Why are markets booming when a crash is on the way?
2 How much do Irish people earn? And what will Covid-19 do to our wages?
3 Drumcondra credit union collapses as merger plan fails
4 Could your old car be giving away all your secrets to its new owner?
5 Permission sought for €150m film and media campus in Wicklow
6 Coronavirus vaccine hopes and positive US jobs figures boost markets
7 Dunnes Stores trials online ordering from Cornelscourt outlet
8 Digicel warns of Covid-19 hit after first earnings rise in years
9 British pound sinking to ‘emerging market currency’ status
10 Government’s budget deficit balloons to €5.3bn on back of Covid spending
Real news has value SUBSCRIBE