Seven waste companies who are operating in Ireland 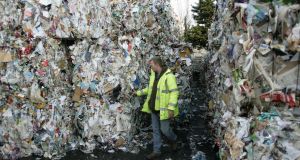 US investment company Cerberus bought Greenstar out of receivership two years ago. Greenstar is based in Ballyogan, Dublin, but has operations around the Republic. It was founded in 1999. Since then it has gone through a number of owners, including manufacturing and waste management group NTR, under whose stewardship it was placed in receivership.

Cerberus – which is caught in a controversy over its purchase of State agency Nama’s Northern Ireland loans – recently agreed to sell Greenstar’s collection business to rival Panda Waste, but the Competition and Consumer Protection Commission (CCPC) must first approve the deal.

Greenstar collects waste from about 80,000 homes and 15,000 businesses. The most recent figures for the business, registered as Starrus Eco Holdings, show that in the 12 months to March 31st, 2015, it earned revenues of almost €99 million, but made a loss of €7.2 million. It employs 850 people.

Panda Waste was founded in 1973 in Slane, Co Meath. Businessman Eamon Waters bought it in 1990. It has grown since then to become one of the bigger players in the national market and in the Dublin region.

Mr Waters is still its biggest shareholder while members of his family are involved. Its chief executive is Brian McCabe.

The group’s parent company, Panda Waste Services, is unlimited, which means it does not have to publish accounts. However, its revenues are known to be about €80 million a year, although it is not known if the business is profitable. It employs 700 people, has about 150,000 household customers and collects waste from 15,000 businesses. If the CCPC approves its bid for Greenstar’s refuse business, this would swell to 230,000 homes and 30,000 businesses. Panda also rents out skips and recently began supplying electricity it said was generated from renewable sources.

Founded more than 40 years ago by Bernard and Maura Buckley, Greyhound is based in Clondalkin, Dublin. The business remains in the Buckley family’s ownership and the couple’s sons, Michael and Brian, are involved.

A bitter 14-week industrial dispute over pay cuts and redundancies catapulted Greyhound into the news two years ago. The dispute ran from June to the following September and at one stage involved the company going to the High Court to prevent workers blocking trucks from entering and leaving its premises.

Greyhound says it employs 400. Most of the companies in the group are unlimited, which means it does not publish accounts or financial information. It collects in the Dublin City Council and South Dublin Council areas, with 250,000 customers.

Bord na Móna bought Advanced Environmental Services (AES) in 2007 for €60 million as part of its expansion out of managing the Republic’s turf-cutting industry. The State-owned company subsequently bought French group Veolia’s Irish waste business, which it merged with AES to create a large waste management division.

AES collects and recycles waste from homes and businesses in Leinster and north Munster. Its focus is outside Dublin and it has more than 100,000 domestic customers and 4,000 businesses. Along with collection, the company generates electricity from waste and owns recycling plants and landfill sites. AES is the biggest part of its owner’s resource recovery unit, which had a turnover of more than €81 million last year, according to the Bord na Móna annual report.

Thornton’s Recycling was founded in the late 1970s and is run by its owners, brothers Shane and Paul Thornton. The company collects waste from about 60,000 customers, according to its website. Its focus is on recycling, composting and manufacturing solid fuel from waste. It also handles liquid waste and hires out skips and shreds confidential documents and other materials. The company has operations in Dublin, Wicklow and Kildare. It says it works on keeping as much waste as possible out of dumps.

Accounts for 2014 – it is not yet due to publish last year’s figures – show it had sales of €49.5 million and earned a profit after tax of just under €1.2 million. At the end of 2014, it said it had invested €4 million in the business that year and was planning to spend a further €3 million over the coming 12 months.

Established in 1988 by Louth businessmen Seán Doyle and Seán Rooney, Dundalk-based Oxigen collects waste from household and business customers. It has about 70,000 clients around the Republic.

Along with collection, it also recycles and treats waste for reuse and is another one of its industry members that has a power generation arm along with a water treatment business . The company has a number of divisions that operate under the heading environmental, commercial, water and power. It also hires out skips.

Mr Doyle and his son Aidan are directors of the business . Its overall parent, Kalbarri, switched from limited to unlimited status in 2009. The previous year the overall group made profits of €2.7 million. Current company records show that two companies based in Douglas in the Isle of Man own Kalbarri.

Chief executive Gene Brown founded the City Bin Co in 1997 in Galway. The group has operations in Dublin, Fingal and Galway, and serves household, industrial and commercial users.

Four years ago, Middle-East-based Averda paid €15 million for a majority stake in the Irish company. Averda has operations in Lebanon, Morocco, Oman, Qatar, Saudi Arabia and the United Arab Emirates, and has over seven million customers.

Brown is still chief executive of City Bin Co. The company initially built its business in Galway before expanding. It moved into the Dublin market shortly before Averda came on board but the investment aided its growth.