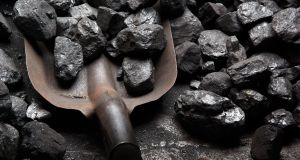 Bord na Móna “will fully comply with the provision of the new low-smoke zone and will exit the bituminous coal business before a total ban comes into effect in 2019”. Photograph: iStock

Government policy has prompted Bord na Móna to close its loss-making coal business, setting up a possible row with unions representing workers hit by the decision.

The State energy company plans to close its coal-supply business following the Government’s recent decision to make the Republic a “low-smoke zone”.

“The company will fully comply with the provision of the new low-smoke zone and will exit the bituminous coal business before a total ban comes into effect in 2019,” Bord na Móna said.

The move has angered workers, whose trade unions on Thursday accused Bord na Móna of keeping their members “in the dark” about its plans.

Group of unions secretary and Siptu organiser John Regan estimated the closure would hit 45 workers at Bord na Móna Fuel’s headquarters in Lullymore, Co Kildare, and a number of other depots.

“Our members are angered with the fact that no engagement took place with their union officials but not surprised by this move by Bord na Móna, as the same approach has been adopted previously,” he said.

The group of unions is seeking a meeting with the company to express member’s anger at the closure plans.

In response, Bord na Móna said it had told staff of its plans to close its coal business and was entering consultations with the 45 workers and their union representatives.

Its coal business is known to be losing money in the face of Government policy such as carbon tax and the low-smoke zone initiative, as well as falling consumer demand.

Unions are likely to demand that the 45 workers be offered voluntary redundancy or redeployment to some other part of the State company’s business.

Staff at its Littleton, Co Tipperary, peat briquette plant recently voted to accept compulsory redundancy, the first such agreement by unions at a State company for more than 35 years.

Bord na Móna stressed that almost 70 per cent of its solid fuels business would not be hit by its decision to stop supplying coal.

It will focus on peat briquette production, which still supports 120 jobs, and its fuel depot at Derrinlough, Co Offaly.

Following a review, the company decided not to begin supplying smokeless coal, a possible alternative fuel, and will not go ahead with plans to build a manufacturing plant at Foynes on the Shannon Estuary.

Bord na Móna is working to develop other businesses to replace its original purpose, to exploit the Republic’s peat bogs. The State company is a key employer in the rural economy, particularly the midlands.