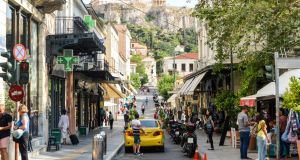 Investors have become more confident about the prospects for the Greek economy. Photograph: iStock

The club of countries being paid to borrow by investors has an unlikely new member: Greece.

The Greek government on Wednesday sold new three-month debt at a negative yield, meaning buyers were prepared to lock in a loss on their investment. The sale establishes a new frontier for sub-zero bond yields, which have swept through euro zone debt markets this year, and caps Greece’s extraordinary rehabilitation in the eyes of investors having received multiple bailouts during the region’s debt crisis.

The Republic has already sold several tranches of debt at a negative yield.

Athens raised €487.5 million from its auction of 13-week bills at a yield of minus 0.02 per cent, compared with positive 0.10 per cent at the previous sale in August. Bills are a form of short-term government debt generally purchased by banks looking for somewhere to park their cash.

The decline partly reflects the fact that the European Central Bank cut interest rates by 0.1 percentage point to minus 0.5 per cent in September.

But the milestone – along with Tuesday’s sale of €1.5 billion of 10-year bonds at a record low yield of 1.5 per cent – is also a sign that investors have grown more confident about the prospects for the Greek economy, which is forecast to grow at 2.8 per cent next year.

With the ECB also announcing the resumption of its bond-buying stimulus programme last month, markets are awash with cash hungry for the relatively high yield that Greek debt offers.

Thanks to the ECB’s stimulus efforts, and gloom about prospects for the global economy, around two-thirds of the government debt in the euro area currently trades at a negative yield, including all German bonds.

Other former crisis spots such as Ireland, Italy and Spain have already joined the negative-yield club, with Madrid being paid to borrow to maturities of up to nearly a decade.

Also on Wednesday, Portugal auctioned €750 million in 15-year government bonds at a record low yield of 0.49 per cent. Demand for the auction of 15-year bonds was almost 2.5 times the amount on offer.

It was Portugal’s first bond auction since the ruling centre-left Socialists (PS) won a general election on Sunday, increasing their share of the vote, but falling short of an absolute majority.

The yield on the country’s benchmark 10-year debt has also dropped below that of Spain in recent days, a rare occurrence since the Iberian neighbours became euro zone members. Spain is heading towards a general election in November, its fourth in as many years. – Copyright The Financial Times Limited 2019