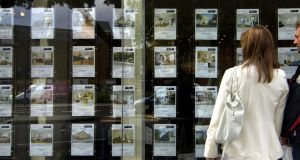 Prices in Dún Laoghaire-Rathdown, typically seen as an indicator of where the market is going, declined by 6.1 per cent. Photograph: Tim Ireland/PA Wire

Property price inflation has slowed to 2 per cent, its lowest level in six years, while prices in Dublin continue to decline.

The latest official figures show the middle or median price paid for a home in the Republic in the 12 months to August was €264,852.

This represented an annual increase of 2 per cent down from nearly 9 per cent a year ago.

The slowdown was even more pronounced in Dublin where prices actually fell by 0.3 per cent on an annual basis in August.

Prices in Dún Laoghaire-Rathdown, typically seen as an indicator of where the market is going, declined by 6.1 per cent.

The rapid cooling of the market has been linked to a pick-up in housing supply. Separate figures show new dwelling completions rose by 25 per cent to 18,072 last year and are expected to be up again this year.

Residential property prices in the Republic, excluding Dublin, were 4.4 per cent higher in the year to August. The region outside of Dublin that saw the largest rise in prices was the Border at 13.1 per cent, while the smallest rise was recorded in the mideast at 0.8 per cent.