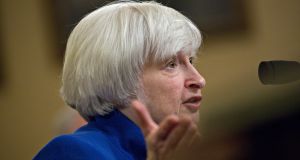 Janet Yellen is likely to field questions about how the Fed feels about tax cuts. Photograph: Bloomberg

With traders fully primed for an interest-rate increase at the Federal Reserve’s final meeting of the year, investors’ focus on Wednesday will be on Fed chair Janet Yellen’s signals about 2018 and 2019, and on the impact of Donald Trump’s tax cutting package on the outlook.

Here are the key points to watch for when the Federal Open Market Committee’s decision is released at 7pm Irish time on Wednesday.

Traders are pricing in a quarter-point increase in the Fed’s target range to 1.25-1.5 per cent, in what would be the third upward move in 2017. Key questions are whether the Fed’s post-meeting statement notes any slight firming in recent inflation numbers and how it characterises America’s growth and employment performance.

Crucially, if the Fed does go ahead and lift rates, are there set to be any dissents? Policymakers to watch are Neel Kashkari of Minneapolis and Charles Evans of Chicago. Both have been worried about America’s soft inflation readings.

With growth surpassing a 3 per cent annual rate in recent quarters and tax cuts looming, upgrades to the Fed’s economic projections are likely.

The jobs market has also been stronger than the Fed predicted back in September, with unemployment at just 4.1 per cent and tipped to fall further. The median Fed forecast during the last round of predictions was for unemployment of 4.3 per cent at the end of this year and 4.1 per cent next.

Crucially, the market will be scouring the Fed’s interest rate outlook. The so-called dot plot of interest rate predictions suggested in September that there will be three quarter-point increases next year. Some Wall Street analysts predict that could be upgraded to four.

Ms Yellen will give her final scheduled press conference starting at 7.30pm. She should be able to give an upbeat assessment of the economy she leaves behind, having presided over sharp declines in unemployment, steady growth and no market mishaps of note during her near-four-year term.

Ms Yellen is likely to be quizzed on the Fed’s expectations for tax cuts and their potential impact on growth, as well as monetary policy. Investors want to know just how stimulative the Fed expects Republicans’ proposed tax reductions to be, and how much extra tightening it will pencil in as a response.

Reporters are also likely to investigate the debate swirling in Fed circles over the causes of subdued inflation and wage growth. Other key topics are the Fed’s response to effervescent financial markets, the sustainability of the recent acceleration in economic growth, and longer-term questions such as the best inflation target for the central bank to pursue.

3 ‘I lost a chance to climb Everest, but these people lost their loved ones’

10 The plan to tackle Ireland’s housing crisis has failed